Fuel sales, considered a good barometer of economic activity, were up 4.5% over quarter 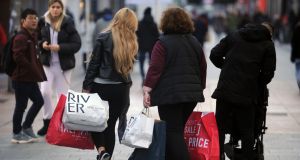 Retail activity picked up considerably in the first three months of the year, according to the latest industry figures. The value of retail sales in the first quarter rose by 4.7 per cent, says Retail Ireland, a division of the employers group Ibec.

In its quarterly monitor of retail activity, the lobby group found that the value of sales in supermarkets and convenience stores rose by 4.6 per cent in the first three months, and up to 5.8 per cent in March alone. The volume of sales rose 6.6 per cent.

Sales at department stores, meanwhile, slipped by 2.8 per cent due to post-Christmas discounting.

“It is clear that retail sales patterns in the second half of 2018 were heavily impacted by Brexit-related commentary. An extension to the negotiating period until October seems to have calmed nerves somewhat,” said Thomas Burke, director of Retail Ireland.