Irishman is honoured with medal in Amsterdam ceremony 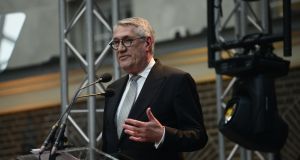 Mr Kelly was honoured at the ceremony in Amsterdam on Thursday night.

The award was created in 2018 to recognise people who have made an outstanding contribution to retailing over their careers in the industry.

It is presented in memory of Isidoro Álvarez, the former chairman of Spanish department store group El Corte Inglés, and supported by his daughters Marta and Cristina Álvarez.

The Irishman said he was honoured to be chosen as the recipient this year and said he was “extremely grateful” for the career he has had to date.

After beginning his career at Dunnes Stores in Ireland, Mr Kelly rose to the top of Brown Thomas, before becoming chief executive of UK-based Selfridges & Co in 2004.

“Throughout my time within Selfridges Group, I have worked with literally thousands of people, across all aspects of the business, all of whom have played a key role in shaping my career trajectory. I owe them and the Weston family a huge debt in terms of inspiring and motivating me over the course of my working life.”

In 2010, he was promoted to the position of managing director of Selfridges Group, working alongside recently appointed chair Alannah Weston, who succeeded father Galen Weston.

The department store group comprises Selfridges & Co, Canada’s Holt Renfrew, de Bijenkorf in the Netherlands and both Brown Thomas and Arnotts in Ireland.

Earlier this year, Paul took up his new role as managing director of Wittington Property Investments, overseeing future plans for the Selfridges Hotel and other properties, in the UK and Europe. Wittington is the Weston family’s private holding company and the controlling entity for businesses including Selfridges Group.

1 HSBC board rethinks overhaul and seeks even deeper cuts
2 ‘Over 1,000’ pubs have interest in Covid-19 insurance test case
3 A Smigin of language goes a long way for well-travelled Cork woman
4 Denis O’Brien forced to lift hood on Digicel in debt restructuring
5 Player Wills site: Hines and APG to seek permission for 416 homes
6 Huawei asks Samsung and SK Hynix for chip supplies in face of US isolation
7 How to . . . move (almost) everything to your new phone
8 Fruit and vegetable firm obtains interim court orders against technical manager
9 Ryanair goes to court over conduct of social welfare appeal
10 Pilita Clark: A lot of us are losing it in lockdown – but we really shouldn’t
Real news has value SUBSCRIBE