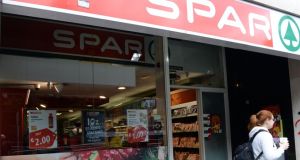 Sales at the BWG group, which operates the Spar retail franchise here, rose by 8 per cent in the six months to the end of March.

The company’s financial performance is revealed in the half-year results of The Spar Group Ltd, the stockmarket-listed South African group that is the majority shareholder of BWG. It reports in the South African rand currency.

Its results show that when BWG’s half-year revenues translated from their original euro, they were up 13 per cent to 11.855 billion rand (€744.2 million), as the rand weakened during the six months making BWG’s contribution more lucrative for its owner in local currency.

BWG made a profit before tax which equated to 256.4 million rand when reported in the South African currency, or €16 million, at Wednesday’s exchange rate.

The South African parent group told its shareholders it was a “superb performance” from BWG, which supplies a network of close to 1,400 stores. Its retail brands also include Mace, XL and Londis.

Of BWG’s 8 per cent sales boost, the South African parent attributed about two-thirds to acquisitions and the rest to organic like-for-like growth.

BWG is run by chief executive Leo Crawford who, along with two other senior executives, owns a minority stake in the Irish business.