Sales were 6.2% ahead of weak year-ago numbers in Britian and Ireland 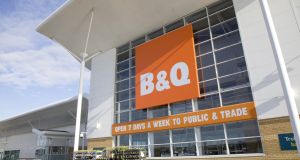 Home improvement retailer Kingfisher missed forecasts for sales growth in its latest quarter, held back by the weak performance of its French businesses.

Shares in the group were down 2.8 per cent in mid-afternoon trading on Wednesday, extending year-on-year losses to 19 per cent, after it said like-for-like sales rose 0.8 per cent in the three months to April 30th, its fiscal first quarter. That was - below analysts’ consensus forecast for growth of about 1.6 per cent.

Kingfisher, whose main businesses are B&Q and Screwfix in Britain and Ireland, and Castorama and Brico Depot in France and elsewhere, is in the fourth year of a five-year programme that was designed to boost earnings. However, profits went backwards in its 2018-19 year and the group said in March it would part company with Véronique Laury, its chief executive since 2014.

Despite Ms Laury’s planned departure, the group is sticking to her strategy. Costing £800 million over five years, it involves unifying product ranges across brands, boosting e-commerce and seeking efficiency savings.

“We think France sales have been affected by continued range disruption and as the digital offer is taking time to ramp up,” said RBC Europe analyst Richard Chamberlain, who has an “underperform” rating on the stock. “We still see a high risk of a potential margin rebase by a new CEO, particularly in France,” he said. Total group sales were £2.8 billion in the quarter, up 1.7 per cent.

Kingfisher said its expectations for the full year were unchanged.

1 Major credit union plans to limit savings accounts to €40,000
2 Passengers face queuing in car parks at Dublin Airport
3 Woodchester founder Craig McKinney dies
4 Student accommodation sector set for harsh Covid-19 lesson
5 Revenue tells court it was entitled to raise €1.64bn tax assessment against Perrigo
6 Penneys will not reopen on Monday despite expected changes to lockdown rules
7 Ikea among major retailers to reopen next week
8 Brother is dragging his heels as executor of uncle’s will - is there anything I can do?
9 Irish stocks gain on Government’s accelerated reopening plans
10 Bad posture working from home easy to acquire
Real news has value SUBSCRIBE