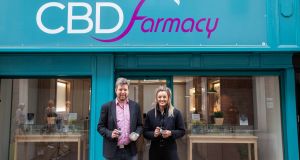 The store, which will sell cannabis oil and cannabidiol products, will be launched by the Plant Farmacy company which plans to spend £750,000 (€859,000) in an investment project to open 15 stores across the North.

Plant Farmacy said it expects to create 60 jobs within the next 18 months in the CBD Farmacy chain and an additional five at a manufacturing facility in Belfast which will produce all of its own brand cannabis oil and cannabidiol (CBD) products.

It also plans to expand into the Republic and will open its first store in Letterkenny, Co Donegal, within the next month.

Managing director of the CBD Farmacy Brian Geraghty is the first businessman or woman in the North to invest in a bricks and mortar store that will sell only cannabis based products.

Mr Geraghty said he had originally hoped to open his first store at an earlier date, but his plans had been delayed slightly because there had been some debate among letting agents in Belfast as to whether CBD was a legal or prohibited product. He also owns the e-cigarette company KIX Vaping, which operates throughout Ireland.

Cannabidiol, or CBD, is one of 113 known active substances called cannabinoids found in the cannabis family of plants. CBD is derived from the hemp plant and is non-psychoactive.

“I think there is some confusion still around it because CBD is at an early stage in its life-cycle, but the sale of cannabidiol has been legal across the UK since 2016 and it is estimated that the number of people using CBD oil in the UK has grown to around 300,000. I think it is the right time to launch in Northern Ireland because there is a strong demand for it thanks to all the research about CBD oil and products,” said Mr Geraghty.

“We’ve decided to invest in opening stores because it is important for us to have a physical as well as an online presence so our customers can come in and speak with experienced advisers face to face. Our locally produced product will display a laboratory certificate of analysis showing a detailed cannabinoid profile which aids reliable, consistent dosing.”