Philips upbeat after US business rebounds 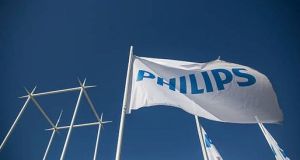 Dutch health technology company Philips said it expects sales growth to accelerate over the remainder of the year after US orders jumped 9 per cent in the second quarter.

Improving business in the group’s biggest market, on top of a 15 per cent rise in second-quarter core earnings, sent Philips’ shares up as much as 4 per cent on Monday.

The group, which spun off its lighting division last year to focus on medical devices and healthcare products, cautioned that markets globally remained volatile, and its overall outlook for 2017 was unchanged.

In western Europe it reported an 8 per cent rise in second-quarter sales but a 10 per cent drop in orders, but investors were encouraged by its performance in the United States, which contributes more than a third of group revenue.

“Our growth in the weak US market proves that we are on the right path,” chief executive Frans van Houten told Reuters in an interview. “Overall there is still a lot of uncertainty in the US, holding back investments by hospitals...but we are outperforming competitors and winning market share.”

Mr van Houten has transformed the former conglomerate into a focused maker of healthcare equipment over the past five years, selling most of its remaining consumer products business in addition to spinning off the lighting division.

The group saw an 8 per cent rise in new orders globally in the second quarter, and Mr van Houten said around half of those orders would turn into revenue before the end of the year, while cost savings would continue to improve profit margins.

This should lead to sales growth of 4-6 per cent in 2017 at constant exchange rates, with the order book expanding at the same pace, and an adjusted earnings margin improvement of around 100 basis points, the company said.

ING analyst Nigel van Putten said the order outlook “points to acceleration in the second half of the year”, maintaining his buy rating on Philips’ shares.

Philips, which has had regulatory problems in the US in the past few years, agreed last month to buy Spectranetics Corp, a US maker of devices to treat heart disease, for €1.9 billion as it expands its image-guided therapy business.

On Monday it said its second quarter core profits rose 15 per cent to €439 million, with sales up 4 per cent to €4.3 billion euro.

“Despite continued volatility in the markets in which we operate, our outlook for 2017 remains unchanged as we expect further operational improvements and comparable sales growth in the year to be back-end loaded, supported by a strong order book,” it said in a statement. – Reuters