In 2016 the foundation received donations of €2.37m, up slightly on the previous year 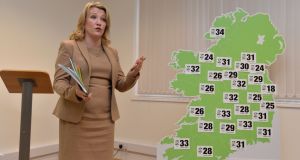 Sharon Foley, chief executive of the Irish Hospice Foundation, received a salary of just under €112,000 in 2016. Photograph: Alan Betson

Income at the Irish Hospice Foundation (IHF) has fallen by almost 6.4 per cent to €4.55 million. The drop is due to a reduction in contributions from fundraising activities, training and education events and HSE grants. However, the foundation did record an increase in donations, of just under €50,000, to €2.37 million.

Fundraising costs at the organisation specialising in end-of-life care was €1.3 million, down slightly on the previous year, while total expenditure also dropped by over €300,000 to €4.25 million.

As with most charities, fundraising is a key income source for the IHF with the directors reporting that the foundation is “primarily dependent on voluntary donations” to fund its programmes.

The company employed an average of 39 staff per month last year with a total of six employees being paid in excess of €70,000. Key management personnel were reimbursed €554,558 for the year, a 5 per cent increase on the previous year. The chief executive of the charity, Sharon Foley, was paid €111,958 in the same period.

Net funds at the company increased to €2.6 million in 2016, a reserve level that is considered to be “adequate for current purposes”.

Over the next four years the IHF plans to maintain its long-term stability through a variety of measures including financial independence and a “cohesive fundraising programme”. It also hopes to secure long term funding for a number of programmes including the “nurses for nightcare” programme – a service providing nursing support for a person in the last days of their life.