Company has enhanced capacity to produce up to 2.1m bottles of whiskey annually

Ireland's newest craft distillery, The Dublin Liberties Distillery has opened to the public. The €10 million operation is both a working distillery and a visitor experience based on Old Mill Street in Dublin's Liberties. 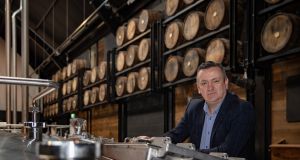 One of Dublin’s newest distilleries is targeting sales of 50,000 cases this year after a recent investment of €10 million to develop a new facility and visitor centre.

The Dublin Liberties Distillery officially opens on Wednesday with capacity to produce 2.1 million bottles of whiskey annually, and accommodate up to 80,000 visitors.

Development of the new distillery has seen a complete renovation of a 400-year-old building in an area historically home to Dublin’s distillers, where a raft of new companies have opened in recent years.

The company, which currently sells two brands of whiskey, including “the Dubliner”, sold 37,000 cases of stock this year, with the United States being the most significant market. Russia, the Czech Republic, Poland and Australia were also cited as significant markets for the group by Darryl McNally, the company’s master distiller.

Speaking to The Irish Times, Mr McNally estimated that up to €28 million has been spent on the new distillery to date, including brand, stock and facilities investment. He believes the scope for the group to grow is significant.

Irish whiskey historically sold as many as 14 million cases, but in 2018 the market as a whole sold about 10 million. Scotch whisky, in comparison, had an output of around 95 million cases last year.

The distillery’s visitor centre will open on Monday next, offering daily tours of the facility which sells whiskey to more than 30 countries. The site also has a cocktail bar to attract people from Dublin’s whiskey tourism scene, which catered to over one million visitors in 2018.

The company is also launching a series of five new whiskeys, ranging from an introductory price level of about €30 up to super premium, which would carry a price tag in excess of €1,000.

London-listed Stock Spirits, active mainly in the eastern European market, took a 25 per cent stake in the distillery in 2017 in exchange for an €18 million investment. The group also has a €10 million credit facility from US bank Wells Fargo.

1 Chris Johns: We’re in for a triple whammy of Covid, Brexit and the US elections
2 Facebook may pull social media platforms from Europe
3 Aldi empire wracked by family feud
4 A look at Elon Musk’s track record ahead of Tesla’s ‘battery day’
5 US judge halts Trump administration’s order to remove WeChat from app stores
6 Rolls-Royce plans to raise up to £2.5bn as Covid-19 bites
7 Eason faces a defining chapter in its long history
8 Importance of making a good first impression at interviews
9 Cliff Taylor: What permanently low interest rates mean for you as a saver or borrower
10 Bord Pleanála clears way for 21-storey tower on former Apollo House site
Real news has value SUBSCRIBE