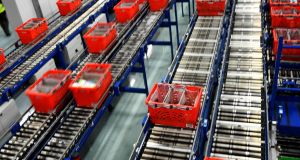 The Ocado Customer Fulfilment Centre in Hatfield on the outskirts of London. Photograph: Dylan Martinez/File Photo/Reuters

Ocado Group Plc licensed its online grocery system to Japanese retailer Aeon, expanding the UK ecommerce company’s technology to a new market in one of its biggest overseas deals.

Ocado’s shares surged as much as 11 per cent early on Friday in London, the most since July.

The British company said it would develop a national fulfilment network to serve Japanese consumers, with expected sales capacity of around a trillion yen (€8.2 billion) by 2035. The partners will build automated warehouses like those Ocado has set up in the UK, where robots fill customer orders for home delivery.

The deal expands Ocado’s reach into Asia as it focuses on developing its technology operations after Marks & Spencer Group bought a 50 per cent stake in the company’s grocery business. Ocado also has licensing deals with Kroger in the US, Sobeys in Canada, Coles Group in Australia, Casino Guichard-Perrachon in France and others.

“Asia is an area of opportunity,” chief financial officer Duncan Tatton-Brown said on a call. “There will come a day when entering China is sensible, but not yet.”

The UK company said the deal would lift operating costs by £25 million (€29.3 million) in the 2020 financial year.

The latest agreement provides some reassurance to investors after a fire levelled one of Ocado’s warehouses in the UK in February. The shares have risen almost 70 per cent so far this year. – Bloomberg

1 Dublin banker sells island off coast of west Cork for €5.5m
2 Lidl goes to court over Aldi price survey
3 Owners of Cork shopping centre sue for €30m after car causes fire
4 Nigeria seeks more time to fight $9.6bn award to Irish businessmen
5 ‘My rent here is so low it’s a joke’
6 Majority of employees don’t want to return to pre-Covid working patterns
7 Will Revenue come calling with tax bill if inheritance tax threshold falls?
8 If tourists are such pariahs should we not be testing them on arrival?
9 European shares climb on progress with possible Covid-19 vaccine
10 Dispute between Bewley’s cafe and landlord goes to mediation
Real news has value SUBSCRIBE