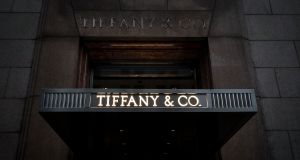 French luxury conglomerate LVMH agreed to buy Tiffany and for more than $16 billion (€14.5 billion) in the largest luxury-goods deal ever, raising the French conglomerate’s profile in jewellery and giving it access to a broader swath of American shoppers.

The owner of the Louis Vuitton brand agreed to pay $135 a share for the US jeweller, according to a statement on Monday. That values Tiffany 13 per cent above an initial $120-a-share bid. Boards at both companies considered the proposal on Sunday.

The all-cash deal marks the biggest-ever takeover for LVMH chairman Bernard Arnault - Europe’s richest person - as he challenges Cartier owner Richemont for dominance in the global jewellery business. While LVMH’s stable of brands includes Christian Dior fashion and Dom Perignon Champagne, the company hasn’t been as prominent in jewellery as in fashion or cosmetics. Acquiring Tiffany changes that.

“It will become the luxury jewellery global-market leader,” Bloomberg Intelligence analyst Deborah Aitken wrote in a recent report as the takeover was discussed. The acquisition is set to more than double LVMH’s jewellery scale and boost its market share to more than 18 per cent, she said.

The largest deal in the luxury industry cements a successful streak for Arnault’s company, with LVMH’s stock price quadrupling during the past eight years. To fuel growth, LVMH has embraced acquisitions, spending more than $12 billion across 19 deals since the start of 2016, according to Bloomberg Intelligence.

Yet even with that spree, LVMH has lagged behind Richemont in luxury jewellery, a significant area of growth in emerging markets such as China. LVMH’s last major deal in that area was in 2011, when it acquired the Bulgari brand.

LVMH raised its bid for Tiffany at least twice before coming to an accord, bolstering its offer to $130 just days ago, according to people with knowledge of the situation. While the company dwarfs Tiffany, with sales of about $50 billion, some analysts had predicted LVMH might need to pay even more, with price targets of $140 at Credit Suisse and $160 at Cowen.

The revised price tag may reflect the changing fortunes of Tiffany, where chief executive Alessandro Bogliolo has cut back on entry-priced gifting options and revamped its marketing to target younger shoppers after a difficult period when the company lost track of consumer trends.

Offerings from the 182-year-old brand include $165 heart-shaped earrings, as well as top-end options like a $165,000 diamond chain. – Bloomberg

1 Why gift a son now if it eats into his tax-free inheritance threshold?
2 Flights abroad ban could last all summer
3 Chris Johns: Economic self-harm is the root of populism
4 Government to avoid ‘cliff-edge’ on Covid-19 payment changes
5 How much do Irish people earn? And what will Covid-19 do to our wages?
6 How to further divide the economy using the wage subsidy
7 Restaurants file court actions against insurers over lockdown losses
8 Columbia Sportswear defies gloom with first Irish standalone shop
9 UK expected to phase Huawei out of 5G network
10 Dunnes Stores trials online ordering from Cornelscourt outlet
Real news has value SUBSCRIBE