Tom Monaghan has faith in customer base built over six decades 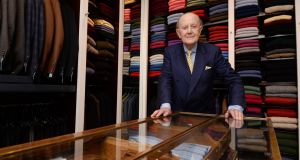 Tom Monaghan is not a man likely to have his head turned by Black Friday. While retailers across the country – both online and in bricks and mortar shops – are falling over themselves in the rush to discount stock as they head into what is their busiest time of the year, he calmly goes about his business on the floor of his South Anne Street shop promising no discounts across the board.

He is in his 90s now and has been selling cashmere clothing from his Dublin shop since October 1960 and over the last 59 years he has witnessed an endless stream of retail fads come and go. He has traded through at least three crippling recessions and come to understand that when it comes to successful retailing it is not always about the bottom line.

“I hear all this talk about Black Friday and the threat posed by the internet but we have faith in our loyal customers and the market from the US and from Asia is growing,” he says.

“We recognise loyalty and my people on the shop floor know who they are dealing with and how long they have been coming here and how much of a discount to offer,” he continues.

He pauses before adding that his 60 years trading in Dublin’s city centre has taught him that there is “a lot more to retail than the simple exchange of money. There is the camaraderie and the banter and the service and the quality and that is what we built our business on.”

He looks at the sweater he is wearing. It is from his own shop and he wore it first when he was in his 60s. “It is 25 years old and it is still good,” he says.

He opened the shop in 1960 “in the same year I got married” at a time when Irish people “didn’t really know what cashmere was but the Americans loved it. We sold mountains of cashmere jumpers for £5 and five shillings, that was $15.”

He says that in spite of many shoppers’ migration online and the current obsession with Black Friday he will continue to do what he has done for six decades for as long as he can.

Monaghan is not the only retailer in Dublin to have turned his back on Black Friday.

While it might be assumed that retailers love the notion of a multi-million euro uplift in sales in November the reality is the new sales phenomenon leads to a significant drop in consumer demand in the run up to Black Friday as well as a smaller Christmas shopping splurge afterwards.

“So many people are holding out for deals for Black Friday,” says Mary Grant who owns a clothes shop in Dublin’s Powerscourt Centre. “Until recently there was never an expectation that retailers would discount in the run-up to Christmas but now it is crucifying small businesses.”

I actually thought of closing on the day and giving my staff a day off. It annoys me so much

She points out that “the last quarter of the year is so important for retailers and to be expected to discount just before Christmas is terrible. It is really hurting.”

She has held the line but says she can do that because she has so much repeat business. “We have a very loyal customer base and they know how we operate and they are buying from us for more than just price.

“Black Friday has done nothing for us and I don’t think it has done anything for small retailers. I actually thought of closing on the day and giving my staff a day off. It annoys me so much.”

Looking at the broader picture, she says consumers’ expectations of what they should pay for clothes has plummeted.

“That is all down to the High Street and the way they produce clothes. Some consumers demand new stock on the shelves all of the time and they want prices to keep falling so what you have is a race to the bottom.”

Black Friday was invented in the 1930s in the US and falls on the day after Thanksgiving and traditionally kick-starts the Christmas shopping season in the US. Retailers open early and offer bargains and discounts.

It has existed in this part of the world for less than a decade after being brought across the Atlantic to the UK by the Walmart-owned Asda in 2012. Since then most Irish shops big and small have almost been forced into sale mode with Argos, DID, PC World, Arnotts, Harvey Norman, Marks & Spencer, Debenhams, Brown Thomas and hundreds of other retailers across the State hoping to lure customers through their doors with promises of discounts of anywhere between 20 and 70 per cent from Friday until next Tuesday.

Many shoppers will probably find bargains but not everyone will. The British consumer watchdog Which? had a word of warning for shoppers this week. It suggested that almost all of the so-called deals to be found on Black Friday can be bought cheaper or for the same price at other times of the year.

Revenue has also urged caution and reminded shoppers to be aware that while the price of goods advertised online can seem attractively low, it may be because tax and duty has not been included in the price advertised and people may be hit for additional unanticipated charges when the goods arrive in Ireland.

Black Friday apart, with four weekends remaining before Christmas, the Irish SME Association has appealed to consumers to make a concerted effort to “shop local” and “buy Irish” this Christmas.

“Every €10 spent locally on Irish products generates about €40 of onward benefit to the local community,” says the group’s chief executive Neil McDonnell.

“Buying from locally owned businesses keeps money circulating closer to where you spend. By shopping locally we support our towns and villages and keep our butchers, jewellers, pharmacies, brewers, distillers, confectioners, post offices, fashion, electronics and hardware stores, and all our local shopkeepers in business.”