Profit for Silk Cut owner rises to €47.7m in Ireland 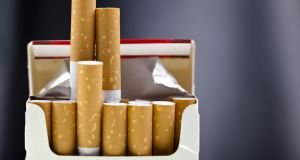 The local arm of Silk Cut owner Japan Tobacco International (JTI) grew its profit by 40 per cent to €47.7 million last year while its turnover reversed a recent pattern of decline.

The company, which also owns the Camel and Benson & Hedges cigarette brands in addition to the Logic vaping brand, saw the market for its products fall 0.4 per cent in 2018 while its share of the cigarette market slipped marginally to 50.6 per cent, recently filed accounts show.

JTI Ireland Limited improved its sales by 2.6 per cent to €721 million last year and the company said this was “predominately generated by the sale and distribution of tobacco products in Ireland as well as some minor sales in electronic cigarettes and e-liquids”.

According to a HSE report from 2018 there are still 864,000 smokers in the Republic. Figures released in November showed that the number of people taking up e-cigarettes is lower than the amount who have quit smoking in recent years. According to the Healthy Ireland survey, around 246,000 people use vapes regularly, roughly one in 20 people in the Republic.

Despite the decline, JTI Ireland’s directors said the “present level of activity is expected to be sustained for the foreseeable future”. Silk Cut and Benson & Hedges remained the biggest brands in the company’s portfolio with a market share of 21.5 per cent and 15.1 per cent respectively, both dipping slightly on the previous year.

During the year JTI Ireland increased its headcount by three to 94 during the year with staff paid a total of €8.3 million, an average of €89,127 each.

JTI was the last manufacturer of cigarettes on this island. It entered the Irish market with the acquisition in 2007 of the Gallahers tobacco business.

In 2015 it announced plans to make 800 workers in its Ballymena cigarette factory – the last tobacco manufacturing plant in the country – redundant. The closure of the Lisnafillan site completed in early 2017 with cigarette production moving to Poland and Romania.

Their decision coincided with the introduction of plain packaging, something the Irish subsidiary had lobbied against and challenged in the courts.

Apple’s $250bn Irish dividend, Bank of Ireland’s U-turn, and the cost of divorce 06:30
Stocktake: A record-breaking cheating season 05:50
Transferring the family farm without a tax headache 05:50
Stocktake: Tech stocks have taken over the market 05:40
Divorce: What will it cost and can you afford it? 05:38

1 ‘No demand... because there are no people’ at well-known Dublin pub
2 Divorce: What will it cost and can you afford it?
3 Transferring the family farm without a tax headache
4 Nearly 30,000 could lose pandemic payment if they do not confirm eligibility
5 Dublin-based AR tech company Antikytera secures investment
6 UK criticised for ‘unforced errors’ on post-Brexit trade deals
7 Apple received $250bn dividend from Irish subsidiary in 2019
8 ‘Humble’ Airbnb going back to basics
9 Apple’s $250bn Irish dividend, Bank of Ireland’s U-turn, and the cost of divorce
10 Pmask coverings likely to suit meat plant workers, founder says
Real news has value SUBSCRIBE