Newbridge facility will employ 350 workers, 100 more than the building it has replaced 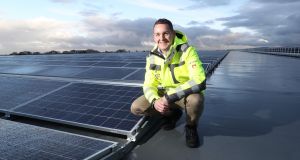 Burgeoning consumer demand for fresh produce helped to spur Lidl to invest €100 million in a new logistics centre in Kildare, which was officially opened on Friday by Paschal Donohoe, the Minister for Finance.

The new facility, on the edge of Newbridge, will serve as the central warehouse and distribution facility for about 90 of Lidl’s stores in the Leinster region.

The 58,000sq m hub is big enough to accommodate three Aviva stadiums and is among the largest buildings in the State. It will employ 350 workers, 100 more than the nearby facility it has replaced.

JP Scally, Lidl’s managing director for Ireland, announced at the launch that the efficiency savings generated by the new facility will be used to fund price cuts on 500 product lines in Lidl stores from January.

The new facility is adjacent to its old logistics hub for the region, which was built in 2000 and which will be decommissioned next week. Mr Scally revealed Lidl is in “advanced discussions” to sell the old facility, on a 48-acre site.

He declined to identify the prospective purchaser of its old facility , but he confirmed it is not IDA Ireland, which in recent weeks concluded a deal to buy a separate 211-acre site next door. He said the new occupant would “create jobs”.

“The old distribution centre wasn’t fit for purpose any more. It was too small,” said Mr Scally. “Especially for the categories that have grown most for us over the last few years, such as fruit and veg.”

The chilled fruit and vegetable storage space in the new hub is four times larger than the space allocated in the old facility. The new building has also been designed to be highly energy efficient. It includes the State’s largest rooftop solar farm, with 4,300 panels across covering 2 acres at a cost of €1 million.

Up to a quarter of the energy used onsite will be provided by the solar farm, which generates enough electricity to power 240 homes. The surrounds of the logistics facility also includes about 3 acres of wildflowers, with a similar-sized plantation of woodland.

Almost all 2,500 product lines sold by Lidl – as well the weekly centre aisle specials such as electronic goods – are first delivered to its warehouses, before being loaded onto trucks and delivered to individual stores. The only products delivered from suppliers directly to stores are Brennan’s Bread and newspapers.

Lidl operates two other hubs in Mullingar and Charleville in Cork.

The new Newbridge facility has 149 truck bays, as well as massive warehouse sections chilled to 14 degrees Celsius, 4 degrees, 2 degrees, and a freezer section at minus 24 degrees, where workers in special insulated clothing must take 15-minute “warm-up breaks” every hour.

Separately, Mr Scally said Lidl will commence 18 new building projects in the State next year. About six of these will be brand new Lidl stores, with the remainder upgrades or rebuilds of some of its older stores, as it revamps its estate ahead of its 20th anniversary in this market.

Lidl, which is constructing 364-student bedrooms adjacent to its new store in Ballymun, is also planning further residential property development at some of its other Dublin sites.