CSO data shows sales fell by 0.5% in October but were still up 3% in annual terms 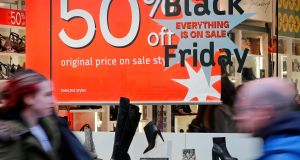 Retail sales fell by 0.5 per cent in October but were still up by 3 per cent in annual terms. Excluding motor trades, sales were down 2.1 per cent in the month but 3.2 per cent higher in the year, the Central Statistics Office (CSO) said.

The weaker monthly trend was driven by a 9.3 per cent drop in the “other retail sales” category, which includes a certain portion of online sales, and by a 5.2 per cent decline in fuel sales.

The sectors with the largest monthly volume increases were pharmaceuticals, medical and cosmetic articles (8.1 per cent ) and clothing, footwear and textiles (3 per cent).

“Retail sales continue to remain erratic on a monthly basis and are still swinging back and forth, but the underlying trend is positive,” analyst Alan McQuaid said.

“Even with the fluctuation in consumer sentiment, overall personal spending has been positive in the past few years, boosted by the increase in the numbers employed in the country,” he said.

“This is despite the fact that the weakness in sterling since the June 2016 Brexit referendum has enticed some shoppers to spend in Northern Ireland, ” Mr McQuaid said.

He said “core” retail sales figures for the first 10 months of 2019 suggest that the Irish economy continued to grow at a solid pace in the January-October period, with the focus now on November and Black Friday in particular.

1 Aldi to impose limits as Christmas toys go on sale
2 Fair deal? Family at odds with hospital and each other not so sure
3 What to consider if older person or loved one needs care at home
4 Monsoon landlords win challenge over creditors arrangement that cut rents
5 Irish house prices could buck European trend and fall this year, says S&P
6 Irish elearning company LearnUpon closes €47.4 million investment
7 ‘I hate haggling because I hate when people do it to me’
8 Ulster Bank to meet Paschal Donohoe to discuss bank’s future
9 First look: Is the iPhone 12 Pro the best smartphone out there?
10 Leslie Buckley’s criticism of inspectors ‘built on thin air’
Real news has value SUBSCRIBE