Speculation follows after firm increases its share of the voting rights to 27.6% from 21% 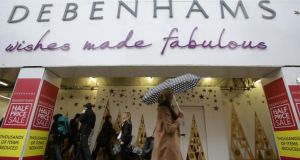 Mike Ashley’s Sports Direct has again upped its stake in the struggling department store chain Debenhams, bringing it close to a level at which it must launch a takeover bid. Photograph: PA

Billionaire retail magnate Mike Ashley is giving shareholders of Debenhams Plc something to cling on to.

The embattled UK department store owner soared in London trading on Friday, defying a broad market selloff, after announcing that Ashley’s Sports Direct International Plc had increased its share of the voting rights to 27.6 per cent from 21 per cent, just below the 30 per cent threshold that would trigger a mandatory takeover offer.

Debenhams is the most-shorted stock on the UK’s FTSE All Share Index, with bets on a fall accounting for 24.6 per cent of shares outstanding, according to the latest data from IHS Markit. The stock has slumped 44 per cent over the past year as sales were pummelled by a flight of customers to online retailers like Amazon. com.

“Should Mr Ashley bid, let us hope he can make for a brighter future for Debenhams,” Shore Capital analyst Clive Black said by email, adding that the firm’s real-estate structure and a possible need for “material capital investment” need to be tackled regardless of ownership.

Sports Direct has concessions within Debenhams stores, although it announced the closure of some outlets in October, citing a clash with plans for increasing its own locations.

Sports Direct sees “huge value for both companies in a strategic partnership,” Liam Rowley, the head of strategic investments, said in a statement. Rowley sees “obvious synergies” in integrating the companies’ respective web operations as well as opportunities for greater collaboration in the UK and abroad.

“Debenhams notes today’s announcement from Sports Direct, with whom we have an established and constructive relationship,” the company said by email. “We continue to pursue our Debenhams Redesigned strategy, a key part of which is partnerships with other brands.”

Retailers like Debenhams are being punished for failing to build viable digital businesses as store owners struggle with Brexit-fuelled currency weakness and a shift in spending away from clothing.

Debenhams’ market capitalisation has shrunk to about £350 million (€391 million) after the shares lost almost two-thirds of their value in the last two years. Sports Direct has lost 12 per cent of its value in that time, giving the Mansfield, England-based company a market value of £1.9 billion (€2.1 billion).

1 Basic income for all: Has the Covid crisis given us a new economic model?
2 Admission of mistake in Oxford vaccine dose raises doubts over reliability
3 Direct sea routes to Europe offer certainty in choppy Brexit waters
4 ‘I don’t need to do any of this. . .I don’t actually need to work.’
5 Only way is up for Stripe as valuation skyrockets
6 Promontoria barred from pursuing doctor over Ulster Bank loan
7 There was no vaccine for Anglo: Why the last crisis was different
8 Pandemic brings a halt to Zara-owner’s Irish expansion
9 Unilever’s Dutch and British arms merge after 90 years ahead of Brexit
10 Online shoppers face unwelcome tax surprise
Real news has value SUBSCRIBE