Botanical range to be produced with polyethylene made from sugar cane 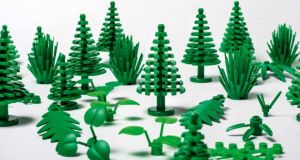 Bioplastic Lego: the new parts can be recycled many times but are unlikely to be 100 per cent biodegradable

The first Lego pieces made from plant-based plastic will go on sale this year, the company has announced. The 85-year-old Danish toymaker said production has begun on a range of botanical pieces, such as leaves, bushes and trees, made using plastic sourced from sugar cane. They will start appearing in Lego box sets with bricks and mini-figures later this year.

The move is part of Lego’s commitment to use more sustainable materials in its core products and packaging by 2030. The polyethylene that the new elements are made from can now be produced with ethanol extracted from sugar-cane material; Lego claims it is as durable as conventional plastic. As a bioplastic it can be recycled many times, although it is unlikely to be 100 per cent biodegradable.

But the polyethylene elements will amount to only 1 or 2 per cent of the plastic parts produced by the family-owned toymaker, one of the world’s most popular brands.

“At Lego we want to make a positive impact on the world around us, and are working hard to make great play products for children using sustainable materials,” said Tim Brooks, vice-president of environmental responsibility at Lego Group. “This is a great first step in our ambitious commitment of making all Lego bricks using sustainable materials.”

Lego bricks have been made with a strong, oil-based plastic known as acrylonitrile butadiene styrene since 1963, although other pieces in its sets do not need such strong and hard materials. The company recommends that bricks no longer wanted are passed on to others or donated to charity shops or, if worn and no longer suitable for play, recycled.

Lego has joined forces with WWF to support and build demand for sustainably sourced plastic, and has joined the Bioplastic Feedstock Alliance to ensure fully sustainable sourcing of raw material for the bioplastics industry.

Lego boasts of the durability of its bricks, with its unique design guaranteeing that two bricks produced decades apart can still fit together. It has set a target of 2030 to reach zero waste in operations, and last year introduced sustainable paper pulp trays for its Lego advent calendar, to reduce plastic waste going to landfill. – Guardian service