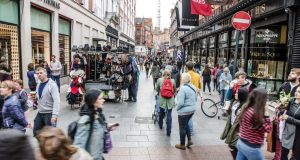 Grafton Street in Dublin. Our shopping areas are still somewhat less homogenised than in Britain, where almost every street seems to have the same chains and brands

By rights Irish retailers should be celebrating like it’s 2006. The economy is basically one big house party. Yet, retailers – transfixed by the competitive threat from online – appear too fitful to enjoy it. The bombshell on Thursday that Debenhams in the UK lost £500 million and is shutting a third of its estate won’t help to soothe any nerves.

About that house party. All of the economic indicators suggest we should be at that feckless time of the evening when the kitchen sounds like Coppers, and your old school friends have started surfing the stairs on your ironing board. Couples who normally barely speak to each other suddenly start snogging, and the neighbours are threatening to call the police because of the noise. We’ve all been there. It’s carnage, but fun.

Ireland’s unemployment rate is 5.4 per cent and hurtling towards effective full employment, which means the State needs to find extra workers. More shoppers. According to an Ibec survey this week, 80 per cent of companies will increase basic pay next year – on top of recent tax cuts. More money. Party on? Not quite, it seems.

The Irish economy is about to end its fifth straight year as the fastest growing in Europe. Yet the retail sector is engaged in nervous talk. Its lobbyists criticised the Government following this month’s budget for not “adequately supporting” it to “protect its competitive position” as retail faces a “critical period” and a “perfect storm of pressures”.

Usually at this stage of a house party the only pressures are on your wooden floors and the durability of the supply of drink. So why are retailers shifting foot-to-foot at the edge of the kitchen, scrolling through their phones, and glancing about the room?

There is a sense building among some in the retail sector, although it is not universal, that Ireland is overdue a dose of Hell on the High Street, the shuttering of big retail names due to the irresistible rise of online competition, principally Amazon. This is already terrifying retailers in the UK and also the United States, where it is known as Retail Apocalypse.

Over the last year or so shopping stalwarts such as Maplin, Toys R Us and Poundworld have all gone wallop. The collapse of House of Fraser was a continuation of the same trend, just more upmarket.

But it is the recent travails of Marks & Spencer, which is closing 100 shops, and now Debenhams, which looks vulnerable to a rescue takeover, that have really resonated with many in the retail sector here.

Some of these brands are integral parts of the Irish shopping landscape. If they are in difficulty due to structural factors such as a drift to online, then what is so special about this State that the same hasn’t started happening here?

Back in 2006, Ireland had deluded itself into thinking this was a unique place, where property prices only ever rise. We were soon disabused violently of that dumb notion. Ireland isn’t special.

There are, it is true, some differences between the position here and what is happening in the UK. Our shopping areas are still somewhat less homogenised than in Britain, where almost every street seems to have the same chains and brands. If only one or two major UK chains go bust it has an outsized visual effect on a large number of communities.

Many of the foreign retailers that have gone bust, such as Toys R Us for example, also had their own debt issues which helped to topple them. The unique intensity of Ireland’s last banking crisis forced many businesses in this State to look their balance sheets in the eye years ago, and deleverage where necessary. Irish businesses are, in the round, well ahead of the UK’s when it comes to addressing debt.

We are way behind the UK, however, when it comes to online shopping, the manifestation of the structural shift in consumer behaviour towards digital.

Once you strip out all of the non-retailing aspects of the online marketplace, such as the buying of flights and financial products, it is estimated within the industry by executives, such as Harvey Norman’s Blaine Callard, that only about 6 per cent of Irish shopping is done online. Callard is a vocal critic of the Retail Apocalypse theory, and believes traditional stores have a bright future.

Britain’s online economy is, proportionally, twice the size of Ireland’s, according to research from Wolfgang Digital. But if the UK is twice as developed, it must also be twice as far into the ramifications of such development, which include stressed traditional bricks-and-mortar retailers. As Irish e-commerce catches up in the near future, won’t the negative effects on our traditional retail industry do the same?

The truth is that, while they may be worried now, the last few years of buoyant economic growth have acted as a sort of paracetamol for the Irish retailing industry. The frothiness masked much of the pain that should have been caused by the growing threat from online. If you have been numbed against the pain, how are you supposed to tell where you are injured?

The industry and policymakers are beginning belatedly to address some of the issues surrounding online shopping. The State, through Enterprise Ireland, this week launched a €1.25 million grant scheme to encourage smaller retailers to develop their online offerings, which is a good start. Yet there is much more to do, such as overhauling the system of property rates that heavily penalises traditional retailers at the expense of pure online competitors, whose only physical property might be a warehouse.

Irish retailers must also do much more to transform their business models to take account of the irreversible pivot towards online shopping. The house party won’t last forever. It’s best to start preparing for what’s ahead before the hangover kicks in.

– It’s a long way, in every possible sense, from the sun-soaked beaches of George Town in the Cayman Islands to the forests of Ballymahon in Co Longford. But that’s how far the latest injection of cash has come to pay for perhaps the most remarkable ever investment in the Irish tourism sector.

Resort operator, Center Parcs UK, is going full-steam ahead with its plans to open a massive holiday park in the midlands. This month, an associate company, CP Cayman Midco 1, pumped €128.4 million into the Irish operation to help pay for the Longford scheme’s ongoing development, according to company filings. That will buy an awful lot of goodwill in the local region, which is crying out for tourism investments of scale.

The company recently held an open day for 1,000 jobs at the resort, which will include a forest park, swimming pools, and holiday lodges capable of accommodating up to 2,500 guests. Center Parcs emphasised its intention to hire local people whenever possible. Up to 4,000 of them showed up.

With this month’s lodgement to Ireland from the Caymans, Center Parcs UK is certainly putting its money where its mouth is. Brexit has created a pile of uncertainty for the Irish tourism sector, but Center Parcs hasn’t wavered at all, despite the obvious risks.

Much of the custom for the Longford holiday park will, it is assumed, come from Britain, where the group already operates five such parks. Official tourism figures released on Thursday showed that the number of British visitors to the Republic was down 9 per cent in September. Yet Center Parcs is as ebullient as ever.

“We don’t believe Brexit will have any real impact on our business,” Center Parcs UK chief executive, Martin Dalby, recently told RTÉ. “We’ll just go with the flow. We’re not concerned about it... We’re here for the long term.”

Unfortunately, so is Brexit.

– Documents filed in the Companies Registration Office show that AIB has stepped up with some of the finance for the making of the animated film Wolfwalkers, which Kilkenny studio Cartoon Saloon recently pre-sold to Apple.

Wolfwalkers, which won’t be released for a couple of years yet, is about a hunter who comes to Ireland in pursuit of the last pack of wolves, but it all goes awry. It sounds a little bit like the Oireachtas banking inquiry...

1 High Court appoints interim examiner to Compu b parent company
2 System agreed for Irish goods to skip checks on UK trade
3 Second Covid-19 outbreak and no-deal Brexit an appalling vista
4 David McCullagh announced as co-host of RTÉ Six One News
5 Ireland faces 'deep downturn' this year and may not rebound until 2024 if there is a second wave
6 ‘The rental situation stops me moving back home’
7 How much do Irish people earn? And what will Covid-19 do to our wages?
8 Supreme Court in Dublin clears Bernie Madoff Ponzi loss case for hearing
9 Why are markets booming when a crash is on the way?
10 Red tape logjam creates fear for Irish timber supply
Real news has value SUBSCRIBE