Sheahan is targeting 10,000 attendees over two days at the annual Pendulum Summit 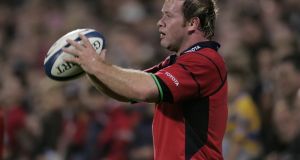 Frankie Sheahan in action for Munster in 2005. Photograph: ©INPHO/Billy Stickland 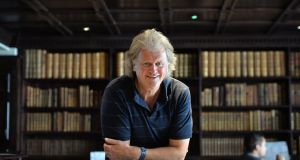 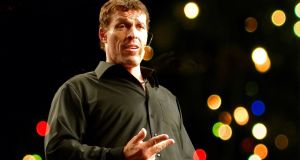 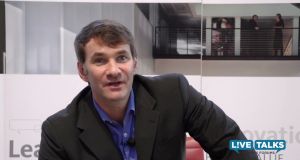 Former rugby international- turned-speaker and events organiser Frankie Sheahan is aiming to more than treble the size of his Pendulum Summit, a US-style motivation and empowerment conference at Dublin’s Convention Centre next January.

Sheahan, who retired from Ireland and Munster in 2009, is targeting 10,000 attendees over two days at the annual event. Pendulum attracted 3,200 in one day six months ago.

On Wednesday, he announced the latest motivational guru to sign up as a speaker – Keith Ferrazzi, a networking expert and “trusted friend of Hillary Clinton”. Chicken soup for the soul guru Jack Canfield and Lisa Nichols are already on board.

It is an ambitious expansion plan for Sheahan, who has perhaps been supping some of the Kool-Aid from his own event. Pendulum is a Las Vegas-style, tub-thumping, evangelical extravaganza. Last January, it was headlined by Tony Robbins, the Michael Jackson of US motivational speakers, who whipped the room into a frenzy and made everyone jump up and down while shouting “I own you” at the person next to them.

Irish people normally bleed cynicism when confronted with egotistical types trying to motivate them. Dublin is not Dallas – we generally don’t get caught up in that sort of emotional incontinence. Yet somehow, it seems to be working for Sheahan. There was a waiting list of 500 people for the last event.

The former sports star comes from a well-known Cork business family. His father made his mark on the city’s property industry, while Frankie is also involved in a mortgage brokerage run by his brother, Joey.

After he retired, Sheahan set up a speakers’ agency, Front Row Speakers, with a roster that now features sports figures such as Joe Schmidt, businessmen including Seán Gallagher and Ray Nolan, and straight-up motivational speakers such as explorer Ranulph Fiennes.

Sheahan’s team contains lots of people who call themselves experts, “mentalists”, “potentialists”, that sort of thing. Front Row lists offices in Cork, Dublin and London, although the last two are mail-drop centres where you buy an address for about €700 a year. But, hey, motivational speaking is all about putting forward the best image of yourself. Nothing wrong with that.

The first summit with 600 attendees was held in 2014, headlined by Canadian astronaut Chris Hadfield. Ferrazzi was among the speakers the following year, which attracted 1,800, with the Robbins event attracting 3,200 most recently. IAG boss Willie Walsh and Greencore chief executive Patrick Coveney have also contributed in past years.

Accounts for the company that owns the summit only capture the 2014 event, but still show a clean profit of about €160,000.

The most expensive two-day packages for the 2017 Pendulum Summit cost almost €5,000. The most basic one-day package currently on offer still costs €850 for two tickets. Empowerment sure ain’t cheap.

Sheahan, who in recent years has scrapped in the High Court with Bank of Ireland over unpaid buy-to-let loans, could well be on course to make a fortune if he can attract 10,000 delegates next January. No wonder he is motivated.

Tickets are aimed at individuals but also at businesses, whose staff can pick up points for courses at the Chartered Institute of Personnel and Development if they attend.

The reports from the Robbins event are a hoot, with most delegates seemingly knackered but exhilarated from jumping up and down listening to his run-of-the- mill platitudes. One small business owner, however, had a moment of clarity walking out the door and told the Daily Mail that he couldn’t believe he had just spent €450 “on a five-hour stand-up show”.

The testimonials page on the Pendulum website contains no shortage of glowing tributes, although if you scratch the surface, you can see some of the connections. Redmond O’Donoghue, the former Waterford Crystal executive and one-time Fáilte Ireland chairman, gives Pendulum a big thumbs up. Sheahan served alongside O’Donoghue on the tourism authority’s board.

David Bobbett, the chief executive of H&K International who is also listed with Sheahan’s speaking agency, gives a positive testimonial. Noreen Coyne of the Kavanagh group of SuperValu supermarkets also endorses Pendulum. Noel Kavanagh, the group’s founder, is another Fáilte Ireland colleague of Sheahan’s. It should be said that there are other positive testimonials from people unconnected to Sheahan.

Thankfully, the Pendulum organisers seem to have a sense of humour over the whole thing. There is a certain tongue-in-cheek quality to the promotional video for the 2017 event, which contains a voiceover that sounds like it was borrowed from a Hollywood movie release. “From the loins of history, Ireland’s saints and scholars were awakened” by Pendulum, it says.

Good luck to Sheahan, because business is business. In this instance, show business.

So it looks like JD Wetherspoon has called time, for now, on its plan to open up to 30 pubs in Ireland. Tim Martin, the Brexiteer who founded the listed British pub company, told The Irish Times on Wednesday it is finding it difficult to acquire pubs and sites in Ireland at appropriate prices.

This is no surprise to seasoned industry watchers. Wetherspoon missed a trick when it decided to enter the Irish market in 2013. It took a softly softly approach, snapping up individual outlets here and there to ease its way into the market.

What Wetherspoon should have done is buy an entire portfolio of 20 or more pubs in one go from Bank of Scotland (Ireland) or one of the other banks that heavily backed the Irish pub sector in the last boom.

BoSI couldn’t wait to get the hell out of Dodge when the collapse came, and there was a clear opportunity for Wetherspoon to pick off repossessed properties. It dithered, and now it is probably too late for the company to build a business here of sufficient scale to make it worth its while.

Ironically, considering Martin’s high-profile support for the cause, Brexit was probably the final nail in the coffin of its strategy. The collapse in sterling has overnight made it even more expensive for Wetherspoon to acquire Irish pubs. It was outbid on another property in Dublin last week.

What Wetherspoon has achieved, however, is to demonstrate to local pub operators that Irish customers respond very well indeed to value-driven, food-oriented propositions.

It is just as well that Dermot Desmond has moved his domicile from Gibraltar to Crans Montana in Switzerland.

His beloved Glasgow Celtic, the only emotional investment the billionaire has ever made, were this week humbled in a European qualifier by the mighty Lincoln Red Imps, a team of part-time firemen and office clerks that is the powerhouse of football on Gibraltar. Emotional, indeed.

Desmond may have upped skis to a Swiss mountain resort, but one of his main investment companies, Bottin International Investments, still resides in Gibraltar. It holds part of his investments in companies including Mountain Province Diamonds, which is involved in a huge new mine at the edge of the Arctic in Canada.

I wonder did the Imps do an Icelandic thunderclap outside Bottin’s headquarters after the match? Desmond would have loved that.

1 Revised help-to-buy scheme opens for applications
2 AIB concedes Covid mortgage policy was ‘regrettable’
3 Nearly 30,000 could lose pandemic payment if they do not confirm eligibility
4 ‘No demand... because there are no people’ at well-known Dublin pub
5 Digital Hub warns of need for emergency funding from State
6 MSD buys Takeda biologics plant in Dunboyne
7 Stripe lures Dhivya Suryadevara from General Motors to be CFO
8 German investor pays €60m for Dublin 2 office block
9 Divorce: What will it cost and can you afford it?
10 Dublin-based AR tech company Antikytera secures investment
Real news has value SUBSCRIBE