Irish shoppers stayed loyal to House of Fraser during administration 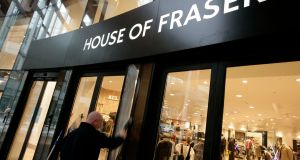 Shoppers didn’t desert the Dundrum outlet of House of Fraser when it fell into administration last year, with new documents showing that the store remained profitable throughout the period.

The Dundrum outlet, which first opened back in 2005, went into administration along with the UK chain last summer. Mike Ashley’s Sports Direct subsequently acquired the group for £90 million (€104 million). His purchase of the Irish outlet at Dundrum had to undergo separate competition clearance before its sale to Mr Ashley could be completed. As a result, administrators EY continued to operate the Dundrum store during this protracted period.

Now, documents filed by EY, show that the Dundrum outlet reported sales of some €7.2 million in the 73-day period of August 10th-October 23rd, 2018. On an annual basis, this would equate to sales of some €34.7 million, but excludes a substantial uptick one would expect for the Christmas/January sales period.

When it comes to expenses, the documents show that €3.2 million was paid out to concessions in the stores during the 73 days, while other substantial costs included employees, at €670,549 during the period, or €3.4 million on an annual basis. VAT charges were some €488,342 while professional fees came to €197,636, for the 73-day period.

On an annual basis, this comes to just €1.2 million, although the rent payments could be structured in a different way which would result in a higher annual cost.

With overall expenses of some €5.3 million, the Dundrum store, which is understood to be one of the better performing stores in the House of Fraser chain, reported net receipts, or profits, of some €2 million in the period under review, or some €10 million on an annual basis.

The document also gives an insight into auditor fees for the administration. The joint administrators EY charged £103,462 (€120,098) for the Irish “transitional services agreement”, which covered running the store during the period of administration, as well as other costs including £63,139 (€73,372) for dealing with concessions, and £37,356 (€43,410) for dealing with the landlord.