Buffett’s Berkshire Hathaway invests in Amazon for the first time

Veteran investor says he was ‘an idiot for not buying before’ 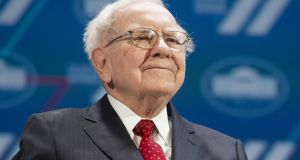 Warren Buffett’s Berkshire Hathaway has invested in Amazon for the first time as the billionaire investor shifts further on his aversion to tech stocks.

In an interview with CNBC late on Thursday, Mr Buffett said he had not made the decision to invest himself, but one of his deputies at Berkshire Hathaway had decided to buy a stake, which would appear on a 13F form later this month.

“One of the fellows in the office that manage money . . . bought some Amazon so it will show up in the 13F,” Mr Buffett said, in a reference to his investment managers Todd Combs and Ted Weschler.

The investment marks a further shift away from Mr Buffett’s earlier policy of avoiding investing in technology companies, which he had previously scorned on the basis he only invested in stocks he understood. He has moved away from this position in recent years, however, and is now the third-largest shareholder in iPhone-maker Apple.

He told CNBC he had been a “fan” of Amazon for some time and “an idiot for not buying” before. – Copyright The Financial Times Limited 2019