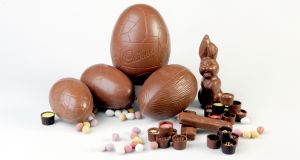 Irish consumers spent €44 million on chocolate eggs in the run-up to Easter, with overall grocery sales at retailers hitting a record of €208.2 million in Easter week alone. Photograph: David Sleator

Irish consumers spent €44 million on chocolate eggs in the run-up to Easter, with overall grocery sales at retailers hitting a record of €208.2 million in Easter week alone.

Figures from Kantar show shoppers also spent €29 million on fresh lamb ahead of Easter, helping to increase grocery sales by 4.1 per cent overall in the 12 weeks to April 21st.

“With both the St Patrick’s Day bank holiday and the Easter weekend giving shoppers cause for celebration over the past 12 weeks, there have been plenty of excuses for people to get in store and spend,” said Douglas Faughnan, consumer insight director at Kantar.

“Shopper visits to the major retailers grew by 1.3 per cent on last year, yielding an additional €28.7 million of value.”

Dunnes Stores topped the list of Irish grocers, with market share of 22.2 per cent, marking the eighth period in a row that the retailer has led the pack. Sales at Dunnes grew 6.1 per cent during the 12-week period, the largest increase recorded since November 2016 as shoppers were lured with premium goods from Dunnes’ Simply Better range and partnerships with specialists such as James Whelan Butchers and Sheridans Cheesemongers.

“Encouragingly for Dunnes, shoppers appear to be happy to spend more in-store,” Mr Faughnan said. “The average price paid at the retailer is up 1.9 per cent on last year, generating an extra €10 million in sales.”

Tesco came in second at 21.8 per cent, with growth of 2.8 per cent during the period, with the retailer’s own brand range accounting for 47 per cent of its sales and rising by 4.3 per cent.

SuperValu, meanwhile, returned to growth, fuelled by a good performance in its fresh food sales. It currently has a 21.4 per cent share of the market. Kantar’s figures showed fresh lamb, fish and beef sales were up by 13.2 per cent, 12.8 per cent and 11 per cent respectively.

Discounters Aldi and Lidl continued to perform strongly in Dublin but also made headway elsewhere in the State. Connacht and Ulster showed growth of 18 per cent for Aldi, while Lidl recorded 13 per cent growth in Munster, giving it the title of fastest growing grocer in the southern provinces.