Goods sold through direct sales, a pop-up shop and auctions 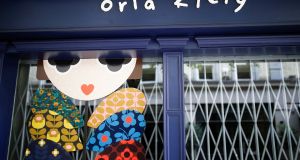 Orla Kiely described the collapse of her clothing business as “a bereavement”. Photograph: Reuters

The administrators of the collapsed Orla Kiely retail and online business have beaten expectations with the sale of leftover stock from the operation’s shops and head office. The goods were sold through direct sales to the public, via a pop-up shop in the run-up to Christmas and in three auctions.

The progress is detailed in a report filed to the UK Companies House by the administrators of Kiely Rowan plc, which went out of business last September with debts of £7.25 million (€8.1 million).

In a press interview in March, Ms Kiely described the collapse of her clothing business as “a bereavement”.

She said: “We did everything we could to save the business and to watch it fail was devastating.”

Joint administrator Chris Newell said in the administrators’ first report that the main asset of the company was the stock which has now been realised in full.

On the three auctions and pop-up shop sale, Mr Newell said that “selling the items directly to the public generated far higher realisations than would have been achieved if simply sold in bulk”.

He added: “After taking into account the agents’ costs and the actual costs of the auctions and the shop, the joint administrators believe that this has generated a better return into the administration.”

Mr Newell also confirmed that a further £30,000 was realised from the sale of items in the US that had not been anticipated in the firm’s statement of affairs.

However any gains made from the higher-than-expected realisation of stock have been almost wiped out with Mr Newell writing off the prospect of recovering £26,000 owed to the firm by debtors.

A connected entity, Killyon Stem LLP held licensing agreements with manufacturers on behalf of the Orla Kiely brand, and the administrators for that firm are expected to receive a minimum of £73,000 in royalty payments.

Mr Newell said he expects the administration of Killyon Stem LLP to to make a payment into the Kiely Rowan plc administration, but that the final quantum is uncertain.

Unsecured creditors will be left empty-handed from the administration, with the administrators currently estimating a deficiency in assets of £7.3 million.

Mr Newell said unsecured claims from creditors were estimated at £6.13 million and the administrators have received 231 claims totalling £4.7 million.

Mr Newell also said in accordance with the administrators’ statutory duties, an investigation into the conduct of the company directors of Kiely Rowan plc has been completed. He said a confidential report was submitted to the Insolvency Service on December 21st, 2018.