After contributing to the demise of many bricks-and-mortar bookstores, Amazon has made a surprising pivot, with plans for stores across the US 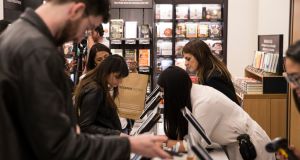 Jeff Bezos, the chief executive of Amazon, has often struck a defiant tone when asked about the company’s dominance of the book industry. “Amazon is not happening to book selling,” he said in a 2013 interview. “The future is happening to book selling.” But when he made that remark four years ago, even a visionary like Bezos might not have imagined that the future would look so retro.

After contributing to the demise of many bricks-and-mortar bookstores, Amazon has made a surprising pivot, with plans for a growing constellation of bookstores around the country. Now, Amazon is bringing its experimental, data-driven approach to physical retail to midtown Manhattan, the heart of the publishing industry.

On Thursday, Amazon will open a store - its seventh - in the Time Warner Center at Columbus Circle. The 4,000-square-foot space, near the site of a now-shuttered Borders store, is just a few blocks from Penguin Random House, and walking distance from Simon & Schuster and Hachette’s Midtown headquarters. This summer, the company plans to open another store on 34th Street.

In a city that prides itself on being a literary mecca, the response to Amazon’s arrival was, unsurprisingly, mixed. “I’m happy there’s a new store where people can see books and encounter them, but I’d rather we were in there,” said Chris Doeblin, the owner of Book Culture, an independent bookstore on the Upper West Side. “If I had the money, I would go and open a store right next to Jeff Bezos’ store.”

Amazon is planning to open six more stores this year, including outlets in Bellevue, Washington; Paramus, New Jersey; and San Jose, California. The company’s push into physical stores might seem at odds with its origins as an online retailer. But it fits with Amazon’s continuing expansion into nearly every corner of the publishing industry. Since its founding more than 20 years ago, Amazon has become the dominant book retailer, and has created niches along the way.

It accounts for nearly half of all book sales in the US, including print and e-books, according to the Codex Group, which analyses the industry. With the introduction of the Kindle in 2007, Amazon drove the e-book and self-publishing boom. It bought Audible, the audiobook producer and retailer, and Goodreads, the popular book review sharing site. It started a publishing company, and now has nine imprints.

Last week, the company introduced Amazon Charts, weekly best-seller lists that track not only the top-selling digital and print books on Amazon, but the ones that customers spend the most time reading. Drawing on data collected from Kindle users and Audible listeners, the most-read list compiles which books are most popular with its customers across digital formats. It is data that Amazon has long collected but never made widely public.

“This is the first time we’re sharing this information with readers,” said Susan Stockman, who oversees Amazon Charts. With its lists, Amazon aims to redefine the notion of a best-seller, expanding it to include books that are “borrowed” from its e-book subscription service, and ones that are streamed on Audible. As a result, the lists give increased visibility to books that might not typically appear on other best-seller lists, like The New York Times’ or The Wall Street Journal’s. The inaugural Amazon Charts list for most-sold fiction features five books from Amazon Publishing, out of 20 on the list.

“This is their attempt to push back and say, We’re legitimate,” said Peter Hildick-Smith, the president of the Codex Group.

The new lists have led to speculation that they might eventually challenge more established best-seller lists. David Naggar, Amazon’s vice president, while not referring to a specific competing list, said: “Many of the weekly lists that are out there today tend to curate, they rerank or add or remove books.” He described Amazon’s new lists as “unfiltered and unedited.”

Danielle Rhoades Ha, a Times spokeswoman, said that readers “value the rigor and independence of The New York Times Best-Seller Lists.” “Unlike lists from individual retailers, our best-seller lists are based on a detailed analysis of book sales from a wide range of retailers in markets nationwide who provide us with specific and confidential context of their sales each week,” she said. “These standards are applied consistently, across the board in order to provide readers the best assessment of what books are the most broadly purchased at that time.’’

Crowdsourcing and data mining are also driving the company’s approach to its bookstores, which act as showcases for books popular with customers on the site. While the stores have traditional categories, like fiction, nonfiction and travel, the most eye-catching shelves feature categories culled from Amazon’s customer data.

“We call this a physical extension of Amazon.com,” said Jennifer Cast, vice president of Amazon Books, during a tour of the Manhattan store Tuesday. “We incorporate data about what people read, how they read it and why they read it.”

The first thing customers see when they walk into the store is a large display table, labelled Highly Rated, which includes books with an average rating of 4.8 stars or higher on a scale of 5, among them best sellers like Born a Crime by Trevor Noah and Shoe Dog by Phil Knight.

Another display case, labelled Page-Turners, features books that people finish reading on their Kindle in fewer than three days. It includes a few thrillers, but also some serious nonfiction books like Hillbilly Elegy by J.D. Vance and When Breath Becomes Air by Paul Kalanithi.

Another section features the most “wished for” books from Amazon’s website, among them Tools of Titans by Tim Ferriss. At the back of the store is an area with books that have amassed more than 10,000 customer reviews. The books bear no prices. “Amazon’s pricing is dynamic,” Cast said. So shoppers must scan books with an Amazon app on their cellphone or at one of the store’s digital kiosks.

The books are all displayed face out. Under each book is a card with the average customer rating, the number of reviews and a featured review from an Amazon reader. Displaying the full cover of each book mimics the visual look of Amazon’s website, and might lure customers to unfamiliar titles.

“The purpose of this store is discovery,” Cast said. “If you already know what you want, you’ll go online and get it.”