Why are 20% of Sligo shops lying empty?

Business in Sligo is ‘picking up’ but short term outlook unclear 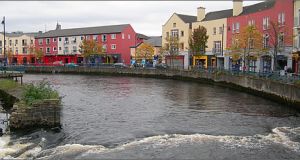 Daft.ie lists 31 commercial retail properties in Sligo town either for sale or to rent, with rental prices starting from €650 a month

More than one in five retail outlets in Sligo’s town centre is vacant. Figures from commercial real estate firm CBRE show that Killarney has also seen an increase in vacancy rates though not on the same level as Sligo, which witnessed a 7.7 per cent rise in the number of vacant shop units over the last three month.

A spokeswoman for CBRE said Sligo was a “case-in-point” for rural towns around Ireland in that developments outside the town centre often drove traffic away from the core.

However, Sligo Chamber of Commerce chief executive Aidan Doyle says that was not necessarily the reason for Sligo town’s decline. He is confident innovation in the town could curb the trend and suggests that it has turned a corner with new retail outlets opening in the coming months, including the embankment house project – a four-storey refurbishment with a mix of office and retail space.

Alan Lyons, whose father, Matt, owns a family-run convenience store in Sligo, says the main issue for the town is that it never attracted large-scale job growth during the boom.

“No big factories to employ 300 or 400 people came to Sligo,” he says. That, coupled with high rents and high rates, caused a drop in the town’s fortunes when the recession hit.

The hit was significant. Mr Lyons says there were four convenience stores in a quarter-mile radius; now his family’s store is the only one left. He also notes the loss of other businesses in the town – for example, a butcher who retired and closed his shop on the basis that he had nobody to pass it on to.

But, Mr Lyons says that, even in the last year, his family’s business has seen a reversal in the trends of the previous years. “It’s slowly coming back,” he said.

His father’s shop sold a winning lotto ticket last March, prompting them to market it as “Sligo’s luckiest shop”. But even without that, he says, Sligo is seeing a regeneration with new retail businesses and restaurants are starting to repopulate the town centre.

However, barriers do exist according to independent Sligo councillor Declan Bree. He is hearing from people who want to set up businesses that rents are still high in the town.

Sligo’s difficulties stem from the fact that a number of developers bought land in the year before the recession and couldn’t develop the land post-2008, according to Cllr Bree. He doesn’t see any change in Sligo’s short-term outlook but thinks that, if the county council starts penalising landlords who have empty premises, it could incentivise new business.

This weekend, Tara McGowan and her sister celebrate the first anniversary of their business in Sligo town, Cait and I. The Irish design and craft shop’s first year of business has been “very positive”, according to Ms McGowan.

She says there are a number of people looking to open new businesses and that footfall in the town is picking up. People in Sligo are “pulling together” and are keen to have a good shopping experience. However she does advocate for stepped rates from the council, whereby younger business would pay less in rates until they become more established.

Daft.ie lists 31 commercial retail properties in Sligo town either for sale or to rent. Rent for retail properties ranges from €650 a month for a unit in an industrial estate not far from the town centre to €35,000 a year for a unit on O’Connell Street, one of Sligo’s prime retail areas.