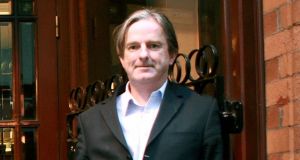 Brody Sweeney, who founded and then lost control of O’Brien’s sandwich bars, has brought his Camile chain of Thai takeaways and restaurants to Britain.

Camile, which has 15 outlets in Ireland following a franchise-led expansion drive last year, has just opened a full-service restaurant and takeaway in Tooting Bec in south London. It is understood the opening took place recently as a “soft launch”, with no publicity or fanfare.

It is the chain’s first venture outside of Ireland and only its second outlet outside the jurisdiction of the State, with one Camile takeaway in Belfast. About a dozen outlets are located in Dublin, with others in Sligo and Limerick.

“Camile has been voted the best Thai food in Ireland three years in a row and we are delighted to now be London,” the company says on its new British website.

“We are so happy to have achieved this. It just shows that we are doing things right,” the company insists.

Mr Sweeney did not respond to a texted request for comment prior to publication.

Profits at the company more than trebled last year, according to accounts recently filed at the Companies Registration Office.

The group employs more than 140 staff, following a major expansion drive. It is seeking franchisees in Dublin, Belfast, Waterford and other regional locations.

It is unclear whether its London venture is a franchise or, more likely, a company owned and run operation to develop the product for future British franchises.

Mr Sweeney, who made his name with O’Brien’s Irish Sandwich Bars and once ran as a general election candidate for Fine Gael, founded Camile at the height of the recession after he lost control of O’Brien’s.

The business proposition is built around delivering food that it markets as healthy and natural. It has recently moved from operating takeaways to opening a handful of full-service restaurants.

During the Celtic Tiger years, Mr Sweeney built his sandwich bars business into one of the most successful franchises in Ireland. It expanded heavily but had a complicated corporate structure and was caught out by the collapse in the property market.

The business was eventually bought out by a company controlled by Graham Beere, who built up the Abrakebabra fast food franchise.

Pilita Clark: Why we’re about to learn if we are really in the A-team 06:00
‘I have a talent for justifying purchases’ 05:20
Irish whiskey sales near milestone of 12m cases a year 05:00
Military-style planning can help businesses battle Covid-19 survival threat 04:49
People ‘overloaded’ by social media more likely to believe false stories 00:01

1 Irish whiskey sales near milestone of 12m cases a year
2 Should my mam wait for house prices to drop before buying?
3 US ‘hard seltzer’ drink White Claw launches in Ireland
4 ‘I have a talent for justifying purchases’
5 ‘I’m so lucky to be in the Caribbean – a million miles from Derry Girls’
6 Pilita Clark: Why we’re about to learn if we are really in the A-team
7 Chris Johns: Past is another country when it comes to our post-pandemic future
8 Military-style planning can help businesses battle Covid-19 survival threat
9 Minister calls on EU to act against tobacco firms ‘undermining’ menthol ban in Ireland
10 Citigroup warns that markets are out of step with reality
Real news has value SUBSCRIBE