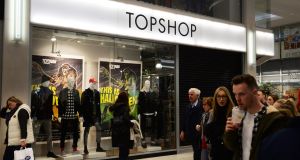 While Topshop is a fixture on British high streets, the chain has only 140 stores outside the UK

Retail tycoon Sir Philip Green is to mount a rescue bid for the Australian arm of Topshop after the fashion chain’s local franchise partner slipped into insolvency.

The British label has opened 24 stores in Australia since 2011, when it sold the rights to a vehicle backed by entrepreneur Hilton Seskin. Most of those locations are concessions in branches of Myer, the country’s biggest department store chain.

But Austradia, which operates the Topshop franchise, has called in administrators to “restructure” Topshop’s Australian operations, Myer said.

Sir Philip was on Wednesday working on a plan that would see his Arcadia fashion empire take ownership of the business, according to a person briefed on the restructuring process.

Myer, which owns a 20 per cent stake following a deal struck in 2015, said it would work with Sir Philip’s Arcadia Group fashion empire “to deliver the best outcomes for customers and other stakeholders”.

International expansion has been a priority for Topshop since 2012, when Sir Philip sold a 25 per cent stake in the chain to Los Angeles-based private equity fund Leonard Green.

Last year the label opened its first stores on the Chinese mainland, deepening its push into the world’s fastest growing retail market two years after an online launch. It said 75 outlets could follow in the country.

While Topshop is a fixture on British high streets, the chain has only 140 stores outside the UK, about one-third of the total. In contrast, “fast fashion” brands such as Zara and H&M, which target a similar demographic, have thousands of stores across Europe, the Americas and Asia.

The Australian bailout would mark the first major deal for Sir Philip since February, when the billionaire paid £363m (€419m) to the insolvent pension fund of department store chain BHS.

The contribution, which improved the retirement incomes of former workers, was a bid to end the bitter recriminations that followed the British retailer’s collapse 13 months after Sir Philip sold it for £1. The deal also prompted the pension regulator to halt its legal action against the tycoon.

Mr Seskin has spent much of this decade bringing British retail brands to Australia. Aside from his involvement in Topshop, he is chairman of Next Athleisure, an Australian sports retailer that last year sold an 80 per cent stake to JD Sports. The British retailer, which is based in Bury in northwest England, last month opened its first Australian store in Melbourne’s central business district. – Copyright The Financial Times Limited 2017