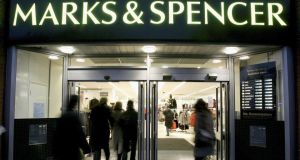 M&S, one of the best known names in British retail, made a pretax profit before one off items of €713 million in the year to April 1st. Photograph: Chris Jackson/Getty

Britain’s Marks & Spencer reported a 10 per cent decline in annual profit and said clothing and homeware sales fell in its latest quarter, dampening the euphoria of the previous three months when it recorded a first increase in nearly two years.

The company recently poached Jill McDonald, the chief executive of Halfords, in an attempt to revive its struggling clothing and home sections.

The firm also said on Wednesday that the trading environment remained tough.

Fourth-quarter clothing and homeware like-for-like sales fell 5.9 per cent, worse than analysts’ average forecast of a 3.3 per cent decline. They had increased 2.3 per cent in the previous quarter.

The fourth quarter sales figures were hit by a later Easter falling outside the quarter and by the key days of the busy post-Christmas sale coming in the third, rather than the fourth, quarter.