Diamonds are still forever, just not for marriage 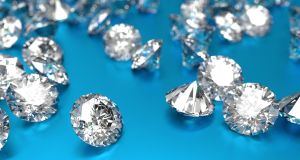 Some millennials are eschewing mined diamonds in favour of man-made stones. Photograph: iStock

Erin Lowry told her partner in 2015 that she did not want an expensive diamond engagement ring.

“I’d much rather have a great trip than the ring I’m wearing.”

The statement by Ms Lowry, 27, who has not yet married, highlights the issue for the diamond industry posed by millennials.

De Beers, the world’s largest diamond mining company, launched one of the world’s most successful advertising campaigns in 1948 when it coined the slogan A Diamond is Forever. It served to put diamond engagement rings at the heart of marriage for the rest of the 20th century.

But many millennials have an ambivalent or negative view of marriage. Increasing numbers of people who have entered adulthood in the 21st century are choosing to marry much later in life compared to previous generations, or not at all.

Furthermore, some millennials appear to want to spend their money on experiences - such as travel - rather than luxury goods.

And many millennials have less disposable income compared to their parents, so those who do want to buy jewellery are turning to gemstones that typically cost less than diamonds, such as rubies or sapphires. Others are buying man-made diamonds because these stones also cost less.

Recognising the scale of the threat, De Beers and its peers have come up with a marketing campaign the industry hopes will resonate with millennials by emphasising the scarcity of mined diamonds and by suggesting that jewellery featuring these stones can embody their commitment to enduring relationships, rather than marriage.

Success is critical to ensure profits over the coming decades for De Beers, which is owned by Anglo-American, and a host of other diamond mining companies including Russia’s Alrosa, Canada’s Dominion Diamond, and London-listed Petra Diamonds.

Growth in the global diamond jewellery market has been slowing. Sales to consumers declined 3 per cent in 2015, partly because of falling demand in China, although revenue rose 1 per cent last year to $80 billion.

De Beers says millennials are now the single most important part of the market, with an estimated 220 million of them worldwide able to afford rings and other jewellery.

The question is how to entice more millennials when the marriage rate in the US, the largest market by sales, is estimated to be at its lowest level in more than 100 years. Just 31 out of every 1,000 unmarried women aged 15 or more chose to marry in 2011, according to the National Centre for Family and Marriage Research at Bowling Green State University.

People are increasingly living together and having children without marrying. The number of US adults in cohabiting relationships has risen by 29 per cent since 2007 to 18 million last year, according to census data. An upcoming Irish Central Statistics Office census release on the shape of Irish households will officially reveal whether or not a similar trend is at play in the Republic, but it would seem likely.

In a further challenge for the diamond mining companies, millennials in the US earn about 20 per cent less than the baby boomer generation at the same stage of life, said a report in January by advocacy group Young Invincibles. Many of these people have also racked up higher levels of debt while they were students compared to their parents.

Ms Lowry, a personal finance writer and author of Broke Millennial , says even when millennials do marry her friends are rejecting expensive diamond rings. They instead buy sapphires and other gemstones such as rubies, or man-made diamonds, after surfing websites such as Etsy and Pinterest for ideas.

“They just want something they personally found beautiful and that’s all that matters,” says Ms Lowry.

Man-made diamonds are formed by artificially growing carbon on a thin slice of diamond to mimic the natural process of crystallisation.

Made by companies such as San Francisco-based Diamond Foundry, where actor Leonardo DiCaprio is an investor, these diamonds represent about 2 per cent of global production, but sales are expected to expand significantly. Man-made diamonds sell for 30 to 40 per cent less than mined stones, say Morgan Stanley analysts.

The mining companies are seeking to strike back at the threat from man-made stones through the first advertising campaign by the Diamond Producers Association, formed in 2015.

The marketing launched in December - initially in the US - is based around the slogan Real is Rare, in a deliberate attempt to try and make mined diamonds appear more desirable than man-made equivalents.

But more importantly, the campaign is meant to woo millennials by suggesting they buy diamond rings to symbolise their commitment to lasting relationships.

Stephen Lussier, head of marketing at De Beers, says: “If you pitch [DIAMONDS]to [MILLENNIALS]as a wedding thing most of them would say ‘Oh that’s not for me’ and just check out. But actually you want them to think about what diamonds symbolise even before they get married.”

The DPA’s budget - half of which goes on advertising - was $12 million in 2016, but it wants to spend a “multiple of that” in future years to have an impact, especially on millennials, says Jean-Marc Lieberherr, chief executive.

This marketing will be important because De Beers stopped its generic diamond advertising in 2006 after the company lost its status as the monopoly supplier of unpolished stones.

Olya Linde, partner at Bain, says the industry has to do a lot more marketing because advertising by retailers specialising in diamond jewellery is not enough. “Diamond jewellery is a type of purchase rather than a particular brand,” she adds.

Kieron Hodgson, analyst at Panmure Gordon, says the DPA is right to de-emphasise marriage in its advertising. “Just relying on one event in one’s life for the bulk of diamond purchases is dangerous,” he adds.