Dixons Carphone hails rising revenue as it braces for Brexit 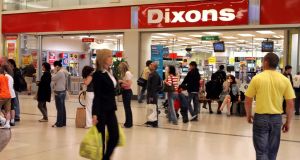 Dixons said that in the fourth quarter, sales in the UK and Ireland were impacted by the later launch of the Samsung S8 and by a late Easter. Photograph: Cyril Byrne

Electricals and mobile phones giant Dixons Carphone has hailed rising full-year revenue, despite what it described as a “lively political backdrop”.

The retailer reported a 9 per cent rise in annual sales, with like-for-like sales growing 4 per cent in the period.

In the UK, full-year revenues were up 2 per cent and like-for-like sales rose 4 per cent.

Chief executive Seb James said: “Despite a lively political backdrop, we have been able to continue to grow our business and maintain very high levels of customer satisfaction across the group.”

The firm said that in the fourth quarter, sales in the UK and Ireland were impacted by the later launch of the Samsung S8 and by a late Easter.

As a result, revenue in the UK fell 1 per cent in the fourth quarter, although like-for-like sales nudged up 2 per cent.

Mr James added: “Given our performance despite this headwind, our view is that the UK consumer continues to be active in the market, but we anticipate no let-up in their very rational view that price and service are critical factors in deciding where to shop.”

The chief executive said in January the retailer is primed to ride out a Brexit-induced economic slowdown and backed UK shoppers to keep spending with credit while borrowing is cheap.