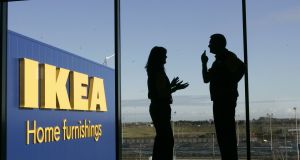 Mr Brodin, a 48-year-old former assistant to Ikea founder Ingvar Kamprad who has worked at the maker of the Billy bookcase and Klippan sofa for 22 years, will take up the new role September 1st, Ikea said in a statement Wednesday.

He is currently managing director of the Ikea of Sweden unit and will move to Leiden in the Netherlands, where Ikea has its headquarters, from Almhult in Sweden, where it opened its first store in 1958 and has its Swedish base.

Mr Brodin will take over the helm of a furniture and retail empire with 348 stores, 45 shopping centers and 140,000 employees in 28 countries. During Mr Agnefjall’s almost five-year tenure, Ikea expanded its presence in China, began a push into India and honed its online offering. That strategy won’t change under Mr Brodin, Ikea chairman Lars-Johan Jarnheimer said in an interview.

“The strategic direction that the company has remains in place, and even if Jesper will mold it, he has been part of the development of the strategy together with Peter in his previous role on the management team,” Mr Jarnheimer said by phone. The new CEO “is used to transformative work, which is more relevant than ever today,” he added.

Mr Brodin started at Ikea in 1995 and has since then worked in purchasing, product-range development, logistics and group management and spent time in locations from Pakistan and China to Denmark and Sweden.

“We have a lot of exciting things ahead of us,” Mr Brodin said in a phone interview. “We’re growing, we’re keen on taking on new markets and we’re looking at how we can improve the customer experience in many dimensions.”

Mr Agnefjall (46) who has worked at Ikea for 22 years and has also been an assistant to Mr Kamprad, said he felt it was “a natural time for me to take a change of path”. The CEO job involves “working 365 days a year, 15 to 16 hours per day, and at some point one needs to hand over to the next generation,” he said.

In the year through August, Ikea’s store sales rose 7.1 per cent to €34.2 billion. The CEO change won’t affect Ikea’s long-held goal of raising annual revenue to €50 billion by 2020, according to its chairman.

The company will have introduced so-called multi-channel retailing, including online sales, in almost all of its markets by the end of the year, Mr Agnefjall said. Ikea plans to open 18 new stores next year, he said.

“We see opportunities to continue to grow in all markets, because we’re quite small and have relatively low market shares everywhere apart from in Sweden,” Mr Agnefjall said. “We see big opportunities in large markets such as China and India and I’d also like to highlight the US, where there are still quite a lot of white spots on the map.”