Iceland to challenge retail chain Iceland over name use 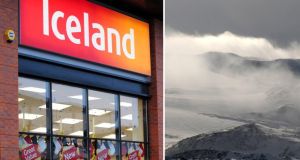 Iceland Foods said it would “vigorously defend” its established rights where there was any risk of confusion between its business and Iceland the country. Photograph: PA Wire

The government of Iceland has launched legal action against its namesake British grocery chain over the use of its name.

The island of Iceland is challenging the exclusive ownership by Iceland Foods of the European-wide trademark registration for the word Iceland, which it said was preventing the country’s companies from promoting goods and services abroad.

Iceland Foods, which is privately owned by entrepreneur Malcolm Walker and the South African investment group Brait, had “aggressively pursued and won multiple cases against Icelandic companies which use ‘Iceland’ in their representation or as part of their trademark, even in cases when the products and services do not compete,” Iceland’s ministry for foreign affairs said.

“The Icelandic government’s legal challenge at the European Union Intellectual Property Office seeks to invalidate this exclusive registration on the basis that the term ‘Iceland’ is exceptionally broad and ambiguous in definition, often rendering the country’s firms unable to describe their products as Icelandic,” the statement added.

The ministry said that Iceland had tried several times to negotiate in the hope of reaching a fair solution and avoiding legal action but its efforts had been met with “unrealistic and unacceptable demands by the supermarket chain leaving Iceland with no choice but to proceed with a legal resolution to the situation”.

Iceland Foods said it had received no recent approaches about an amicable resolution of the issue, which was its preferred approach.

“We very much regret that the government of Iceland has apparently decided to take legal action over the use of the name Iceland,” the company said.

“While we will vigorously defend Iceland Foods’ established rights where there is any risk of confusion between our business and Iceland the country, we have been trading successfully for 46 years under the name Iceland and do not believe that any serious confusion or conflict has ever arisen in the public mind, or is likely to do so. We hope that the government will contact us directly so that we may address their concerns,” the company said.

The supermarket chain’s sales have risen after it introduced better-quality foods including more seafood and branded ranges with Slimming World and Pizza Express. Its sales were up 8.3 per cent in the 12 weeks to November 6th, according to analysts at Kantar Worldpanel.

It was founded in Oswestry in 1970 but does have historical links to its namesake country. Icelandic retail conglomerate Baugur bought a controlling stake in the grocer which it held until its collapse in 2009.

Icelandic banks Landsbanki and Glitnir took on the stake, which was later acquired as part of a management buyout led by Mr Walker. Brait, which is backed by South African retail entrepreneur Christoffel Wiese who also owns stakes in New Look and Virgin Active, owns 57 per cent of Iceland.

The company, whose headquarters are in Deeside, has more than 800 shops across the UK and employs more than 23,000 staff. – (Guardian service)