Market share rises to 22.6 per cent, just ahead of SuperValu with Tesco in third 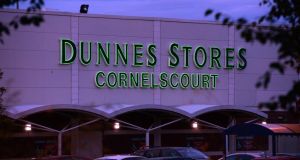 Dunnes Stores increased its market share to 22.6 per cent in the 12 weeks to November 6th, 0.2 per cent ahead of SuperValu. The rise is attributed to the success of Dunnes’ Shop & Save campaign.

A stellar year for Dunnes Stores looks set to finish on a high after the supermarket leapfrogged SuperValu to become the most popular grocer in the Republic.

According to the latest figures from retail analysts Kantar Worldpanel, Dunnes Stores increased its market share to 22.6 per cent in the 12 weeks to November 6th, 0.2 per cent ahead of SuperValu.

Tesco is in third place with a market share of 21 per cent.

The battle of the discounters remains fierce with just 0.1 per cent separating Lidl and Aldi.

Lidl’s share of the market has increased slightly to 11.4 per cent with sales growth of 5.3 per cent. Aldi’s strong performance continues with sales growing by 6.6 per cent year on year – leading to a healthy increase in market share from 11.1 per cent last year to 11.3 per cent in the past 12 weeks.

“Persuading shoppers to add one extra item to every basket – worth €3.20 on average – may not sound like much, but across the country this adds up to an additional €2.8 million each week. Growth across a wide range of categories has contributed to the retailer’s overall sales increase of 6.7 per cent year on year, with toiletries, alcohol, frozen food and confectionery performing particularly well.”

Meanwhile, grocery market inflation stands at 0.7 per cent for the 12-week period to early November, down from the 1.3 per cent seen last month.

This figure is based on more than 30,000 identical products compared year on year in the proportions purchased by Irish shoppers and therefore represents the most authoritative figure currently available. It is a “pure” inflation measure in that shopping behaviour is held constant between the two comparison periods – shoppers are likely to achieve a lower personal inflation rate if they trade down or seek out more offers.

1 Majority of employees don’t want to return to pre-Covid working patterns
2 Homeworking is depriving me of juicy gossip
3 If tourists are such pariahs should we not be testing them on arrival?
4 The $6bn judgment pitting Nigeria against Irish businessmen
5 ‘My rent here is so low it’s a joke’
6 Primark rejects £30m bonus for bringing back staff
7 State to auction €750m worth of Irish treasury bills
8 Investors in Irish solar energy fund in line for €20m payout
9 Norwegian airline sued in Dublin by inflight caterer
10 Tobacco giant’s menthol-ban substitutes take 5% share of Irish market
Real news has value SUBSCRIBE