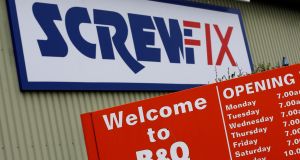 Total sales for Kingfisher, which trades as B&Q and Screwfix in the UK, rose 11.5 per cent in the third quarter of this year. Photograph: Darren Staples/Reuters

Shares in the firm, which trades as Castorama and Brico Depot in markets including France and B&Q and Screwfix in Britain, fell up to 3 per cent on Tuesday after it reported underlying sales in France fell 3.6 per cent in the three months to October 31st.

Kingfisher blamed France‘s weak economy and a reduction in promotional activity at Castorama for the outcome.

The group‘s performance in France contrasted with the outcome in Britain and Ireland, where like-for-like sales increased 5.8 per cent, driven by a 12.7 per cent rise at Screwfix that reflected well received new and extended ranges.

B&Q‘s like-for-like sales were up 3.5 per cent –- a sixth straight quarter of growth.

Sales in Poland rose 6.7 per cent, benefiting from supportive market conditions, including a rise in state benefits.

Kingfisher has not seen any clear impact on UK demand since Britain voted to leave the European Union in June. – Reuters

1 Belgium helps Ireland to a Brexit boon
2 ‘My rent here is so low it’s a joke’
3 New Powerscourt Springs hotel to open in defiance of virus gloom
4 Can Grafton Street stop the flood of closures?
5 This charming man: how Paschal Donohoe won the Eurogroup presidency
6 ‘Sad day’ for House of Ireland as tourism retailer goes out of business
7 Goodbody loses a second suitor as Bank of China deal falls through
8 Pharmaceutical industry signals it won’t extend drugs agreement
9 Goodbody’s planned €155m sale to Bank of China falls through
10 Donohoe’s new role puts State at centre of debate over EU’s future
Real news has value SUBSCRIBE