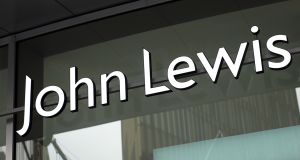 John Lewis has long been seen as an attractive entrant to the Sprucefield retail area outside Belfast. Photograph: iStock

Attempts to secure the first John Lewis store in Northern Ireland were given a major boost on Friday by a High Court order on a new planning blueprint for greater Belfast.

A clause restricting future expansion of the Sprucefield shopping centre in Co Down to bulky goods only is to be removed from the Belfast Metropolitan Area Plan (BMAP). Mr Justice Treacy ruled that the rest of BMAP can now be implemented, declaring it a “fair, just and proportionate” remedy.

But Belfast City Council immediately announced its intention to appeal the outcome amid concerns for the impact on the retail sector.

Mr Durkan’s approval of the planning framework adopted in 2014 was challenged by the DUP’s Arlene Foster, the Stormont enterprise minister at the time.

But following the Assembly elections in May, consent was reached by newly created departments on the way forward in the legal action. Simon Hamilton, the DUP Minister for the Economy, and Sinn Féin Minister for Infrastructure Chris Hazzard, agreed on a proposal to have BMAP adopted without the bulky goods restriction.

A barrister for Belfast City Council on Friday urged Mr Justice Treacy against rubber-stamping the draft order. He argued that it would involve the court veering into the area of creating planning policy.

However, David Scoffield QC, who brought the original challenge on behalf of the Minister for Enterprise, claimed that Mr Durkan should not be allowed to get away with “going on a solo run”.

He said: “If correct, that would drive a coach and horses through the Northern Ireland Act and would be a charter for Ministers to effectively chance their arm and hope for the best later on.”

Despite the council’s objections, Mr Justice Treacy agreed to make the declaration sought by the two departments.

He said: “The court is merely providing a measured remedy to address the identified illegality which is in the view of the court fair, just and proportionate.”

Announcing the council’s intention to appeal the judgment, councillor John Hussey, chairman of the North’s Strategic Policy and Resources Committee, said it raises important issues about the role of the courts in sanctioning changes to planning policy when the original complaint was that a Minister acted unlawfully. He added: “This is not about Belfast versus anywhere else.

“The key point is that Belfast as a regional city needs a critical mass of services including a diverse retail offering. Neglecting Belfast will have an adverse effect on the economy of Northern Ireland as a whole.”

But Sir Jeffrey, the DUP MP for the Sprucefield retail park area, predicted a new planning application would be submitted by the site’s owner INTU.

Welcoming the court decision, he said: “I want to thank the Northern Ireland Executive for the pragmatic approach they have taken in resolving this issue.

“The restriction should never have been placed on Sprucefield in the first instance – I’m pleased it’s now been removed.”

He added: “You just have to drive around Sprucefield to see the thousands of shoppers we are attracting across the Border, and I hope this clears the way for further expansion.

“We will certainly be looking to attract John Lewis into the park as part of future development.”