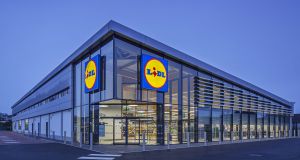 UK Lidl and Aldi have raised the price of a four-pint bottle of milk to 99p, from 95p – a 4 per cent lift

Discount retailers Aldi and Lidl have begun putting up the price of basic groceries, including milk and bananas, as the squeeze from the Brexit-driven fall in the value of the pound hits home.

The two supermarket companies have raised the price of a four-pint bottle of milk to 99p, from 95p – a 4 per cent lift, which puts them on a par with Asda and just 1p behind Sainsbury’s, Morrisons and Tesco. A pack of bananas is up 72p from 68p – an increase of about 6 per cent – putting them on a par with the major supermarkets, which sell 1kg of loose bananas for about 68p.

The price move on two of the most frequently purchased items marks a step change in the price war between the fast-growing German chains and the UK’s traditional big four supermarkets. It comes as Aldi and Lidl’s pace of growth has hit a five-year low in the face of price cuts and service improvements at their bigger rivals

Aldi said it was still selling loose bananas for 68p per kg but had changed the way it priced packs of bananas from 68p for a 1kg bag to five bananas for 72p. It said this still made it the cheapest in the market, or 8p less than a five-banana pack at Tesco, which had the lowest prices of the big four.

However, industry insiders said the move meant Aldi was masking an even bigger price rise, as five bananas were likely to weigh less than 700g. Lidl has simply moved its 1kg bag up in price.

“This shows they are hurting. They have had to move up on price on the single most popular product line in any supermarket,” one source said.

Most traditional supermarket chains price their loose bananas, which shoppers compare closely with their competitors, slightly more cheaply than bagged bananas. Before changing its packs, Aldi would have been cheaper than other supermarket’s loose bananas, now they are on a par with the more expensive bags.

“Gone are the days when Aldi and Lidl can respond to every price cut by the supermarkets with an equally big price cut,” said Bruno Monteyne, an analyst at Bernstein Research, who suggested that the supermarket price war was going into reverse.

“Discounters raising their prices upwards to the same or higher price levels than the supermarkets on the most important food products is surely a huge leap forward.”

Matthew Barnes, chief executive officer of Aldi UK and Ireland, said: “We absolutely guarantee that our customers will always pay the lowest grocery prices in the UK when they shop at Aldi.

“This has been verified time and time again by the industry’s most authoritative independent price survey, the Grocer 33, which in our most recent appearance showed Aldi to be 17.9 per cent cheaper than our nearest competitor.”

A spokeswoman for Lidl said it had changes its prices up to reflect similar moves by the rest of the market.

Bananas are priced in dollars and so the 17 per cent fall in the value of the pound against the US currency since the Brexit vote meant that they have become much more expensive to source.

Milk and other dairy prices are also being forced up, partly due to a fall in supply after the previously low price forced dairy farmers to reduce their herds or move on to other production.

The fall in the value of the pound against the dollar has exacerbated the situation as competition from imported dairy products has diminished while processors can get more for exporting British cheese, yoghurt and dried milk abroad.