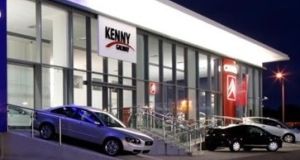 Kenny Galway car dealership on Tuam Road, Galway was founded by Brian Kenny in 1992 and holds franchises for Citroën, Volvo, Kia and Peugeot.

The High Court has appointed an interim examiner to west of Ireland car dealership Kenny Galway, effectively replacing a receiver appointed by a fund to the firm earlier this week.

The firm, based on Tuam Road, Galway, employs 33 people and will reopen for business this Saturday, the court was told on Friday evening.

Ms Justice Marie Baker appointed Neil Hughes interim examiner after accepting, based on the report of an independent expert, the firm, while insolvent, has a reasonable prospect of survival once certain conditions, including procuring investment, are met.

She made further interim orders restraining a fund-appointed receiver taking any further steps in the receivership pending the matter returning to court on December 13th.

Mr Tennant had informed the company he would take no further steps in the receivership if an interim examiner was appointed, counsel added.

Kenny Galway was founded in 1992 by Brian Kenny and holds franchises for Citroën, Volvo, Kia and Peugeot. In a statement on its website this week, Mr Kenny attributed the receivership to the transfer of property loans to Sankaty Advisers, a US-based affiliate of investment group Bain Capital. Sankaty purchased a portfolio of loans from Ulster Bank last year.

Zoom nearly doubles revenue forecast on remote-work boost 06:52
Lufthansa records net loss of €2.1bn in first quarter 06:40
In six months we will be in the grip of a 1980s-style recession 06:30
Call to ease quarantine rules, dismal data on sales and the cost of primary healthcare 06:30
Primary care centre network will require €2.55bn investment 06:00

1 In six months we will be in the grip of a 1980s-style recession
2 Aer Lingus wants quarantine period axed to resume flights in July
3 Apple tax case: Four individual lawyers paid over €500,000 each
4 Should my mam wait for house prices to drop before buying?
5 Stocktake: Has Warren Buffett lost the magic touch?
6 Call to ease quarantine rules, dismal data on sales and the cost of primary healthcare
7 Covid-19 mortgage breaks: What’s the catch?
8 Brother is dragging his heels as executor of uncle’s will - is there anything I can do?
9 Parts of Brown Thomas and Arnotts to reopen next week
10 Deloitte expands into cloud computing with deal for DNM
Real news has value SUBSCRIBE