Foreigners and children in organised thefts of iPhones, retailers claim 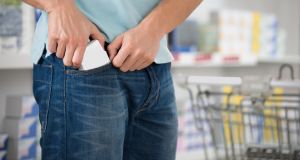 The shoplifting of iPhones is out of control, according to Retail Excellence.

Organised gangs are flying into Dublin at weekends to steal iPhones for resale on the black market overseas. And children are being used in an almost Dickensian fashion by shadowy figures to shoplift to order, representatives of the retail trade told a briefing in Leinster House on Wednesday.

Retail Excellence gave a presentation to Oireachtas members. They painted a bleak picture of the retail crime issues affecting the industry.

TDs and Senators were told that retail crime is on the increase. Retail Excellence head of public affairs Lorraine Higgins called for “the impact of retail crime on owners and shop staff to be higher up the political agenda”.

She said retail crime was costing millions of euro every year and called for stiffer penalties to be introduced to act as a deterrent – “particularly for anyone convicted of assaulting retailers or their staff”.

The chairman of Retail Excellence’s loss prevention group, Michael Neary of Harvey Norman, told the briefing that some retailers had “lost faith in the system because enforcement of the existing law is an issue, resources are an issue, and the penalties handed down to repeat offenders do not reflect the seriousness of their repeated offences”.