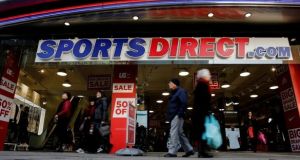 Grant Thornton, the auditor of Sports Direct International, has told UK regulators it intends to quit its role following concerns over the disclosure of a €674 million tax bill from Belgian authorities, the Financial Times reported late on Monday.

The firm made the decision to resign after Sports Direct informed it of the tax bill just hours before Grant Thornton was due to sign off on the company’s annual results, the FT said.

Grant Thornton is set to step away from its role after the troubled retailer’s annual general meeting in September, the FT said.

A Grant Thornton spokesman said the company had no comment on the FT report. Sports Direct did not immediately respond to a Reuters request for comment.

The audit watchdog Financial Reporting Council has been informed of its plans, the newspaper said, citing sources.

The FRC also did not immediately respond to a Reuters request for comments.

The British sporting goods retailer earlier in the day blamed the Belgian tax bill as the reason for the delay in announcement of its annual results.