Company counts some of the world’s top food, tech and pharma companies as customers 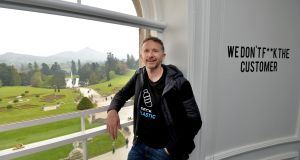 Norman Crowley: “Businesses around the world waste at least 50 per cent of the energy they consume.” Photograph: Alan Betson

Crowley Carbon, the energy efficiency company founded by Cork entrepreneur Norman Crowley, is on target to double its overall revenues to €200 million this year as it continues its work with some of the largest businesses in the world.

In an interview with Inside Business, a podcast by The Irish Times, Mr Crowley said the group employs about 400 people and had revenues last year of just under €100 million. “We double in size every year,” he said. “It’s scary growth.”

The serial entrepreneur, who had sold four technology businesses by the time he set up Crowley Carbon in 2011, declined to reveal the company’s profits. “We do very well.”

Crowley Carbon advises businesses on how to improve their energy efficiency. He has also established a business fitting electric engines to vintage cars called Electrifi Classic Cars, and is planning to establish a “meatless meat” business later this year.

“Businesses around the world waste at least 50 per cent of the energy they consume. That’s a massive financial opportunity,” he said.

Mr Crowley said the company, based in Enniskerry, Co Wicklow, numbers four of top eight food companies in the world as customers, along with five of the top 10 tech businesses and eight of the top 10 pharma groups. “We’re in 26 countries around the world . . . growing like a weed.”

In Ireland, Glanbia is a big client. “We’ve reduced energy consumption there by 30 to 40 per cent,” he said.

According to Mr Crowley, solutions will be found to tackle the carbon footprint of airlines.

“It will be solved in the next 20 years. Smaller, short-haul planes are going to go electric and Siemens already has a plane with electric engines. Longer haul it’s going to be hydrogen, generate hydrogen fuel using solar energy and we’ll put that in to a different type of plane and it’s going to go a lot faster than the current planes.”

He said feeding cows seaweed supplements would stop them from “belching and farting to the tune of about 70 per cent”, thereby reducing pollution from the farming sector. “We’ll fix that over the next seven to eight years.”

Electrifi has received permission to establish a factory at Powerscourt near Enniskerry, where it already has a design centre. He expects the factory to produce about 30 cars a year, with its main facility in Wales.

“Last year we sold 75 cars in that business and this year our forecast is to sell over 200 cars and these are some of the most beautiful cars you will see.”

Mr Crowley said it recently sold a reconditioned Ferrari 308 for “just under a million quid”.

It is converting a Fiat 500 for actor Dev Patel, and Ellie Goulding’s wedding car, which he described as “a beautiful old VW mini bus”.

Will the climate change crisis be solved in the next decade, the timeframe set down by many experts? “At the rate we’re going we’re not going to get there. There’s going to be a lot more Australian [bush fires] and a lot more droughts in Ireland. We will get there in the end and we’ll be okay, but there’s no excuse for not moving faster.”