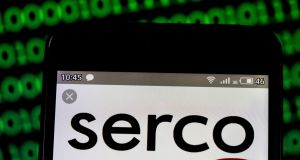 The long-running scandal over how it billed for electronic tagging contracts has hampered Serco. Photograph: Getty Images

Britain’s Serious Fraud Office (SFO) on Monday charged two of Serco’s former directors with fraud and false accounting in its investigation into the public services outsourcer’s electronic monitoring contract with the ministry of justice.

The long-running scandal over how it billed for electronic tagging contracts has hampered Serco, one of Britain’s largest government contractors, in the last few years. The investigation remained active, the SFO said.

The move follows a deferred prosecution agreement reached between the company’s subsidiary Serco Geografix and the SFO in July. The division was made to pay a fine of £19.2 million (€22.99 million).

Nicholas Woods, former finance director of Serco home affairs, and Simon Marshall, Serco’s former operations director of field services, were charged with fraud and false accounting in relation to representations made to the ministry of justice between 2011 and 2013, the SFO said.

A solicitor for Mr Woods, who was additionally charged with false accounting in relation to the 2011 statutory accounts of Serco Geografix, said Mr Woods denies the allegations.

There was no immediate comment from Mr Marshall or his solicitor. – Reuters