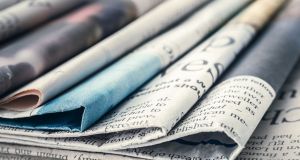 The CCPC dealt with a series of media mergers during the year including the acquisition of INM by Mediahuis. Photograph: iStock

Fewer mergers and acquisitions were assessed by the State’s consumer watchdog last year after the financial thresholds required of deals were increased.

Some 47 mergers were notified to the Competition and Consumer Protection Commission (CCPC) in 2019, a 52 per cent fall on the previous year. The reduction reflects new financial thresholds for deals which came into affect last January.

The turnover threshold for two or more of the entities involved in a deal rose from €3 million to €10 million, while the aggregate turnover of all the undertakings rose from €50 million to €60 million. The effect of the change was to remove transactions that were “unlikely to raise competition concerns”, CCPC member Brian McHugh said.

“This reduces the regulatory burden on Irish businesses and allows the CCPC to focus resources on transactions which are more likely to raise competition issues,” he added.

During the year the commission issued 49 determinations, of which nine required an extended review period to achieve approval. These included a deal to offload half of MCD Productions to music giant Live Nation and the takeover of Kings Laundry, the the main supplier of linen to Irish hotels, by French-listed group Elis.

During the year the CCPC also dealt with a series of media mergers such as Mediahuis’s acquisition of Independent News and Media, and the acquisition by Formpress, which controls titles including the Limerick Leader, of two businesses.

Last year also saw the Republic’s first criminal prosecution involving “gun jumping” in a merger. Following a CCPC investigation, Spirit Ford owner Armalou Holdings had to pay €2,000 to charity after pleading guilty to breaking competition law by failing to get the regulator’s approval to take over rival Lillis-O’Donnell Motor Company in 2015.

“Compliance with the merger regime is an important aspect of the work of the CCPC. It ensures consumers are protected from mergers that have considerable potential to harm the market and consumers. As part of this role the CCPC welcomes the first prosecution and guilty pleas for gun-jumping conduct in Ireland, ” Mr McHugh said.

Mr McHugh added that this year would likely see the introduction of a simplified merger procedure. The change, expected to be commence by the end of the first quarter of 2020, will “deliver further efficiency benefits for businesses through a reduced notification burden and speedier decision timelines,” he said.