PMI figures have been published for Ireland, Germany, France, Italy, China and others 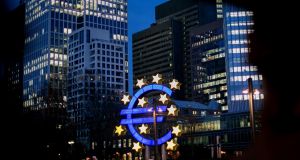 A PMI for the euro zone’s dominant services industry bounced to 52.8 from November’s 51.9.

Euro zone business activity remained close to stagnation at the end of last year, a survey showed on Monday, as an upturn in services activity only partially offset a continued decline in the bloc’s manufacturing industry.

That beat a preliminary estimate which suggested no change from the previous month but remained close to the 50 mark separating growth from contraction.

“The PMI data suggest the euro area will struggle to have grown by more than 0.1 per cent in the closing three months of 2019.”

A PMI for the bloc’s dominant services industry bounced to 52.8 from November’s 51.9, above a preliminary reading of 52.4. But a manufacturing PMI out last week showed factory activity contracted for an 11th straight month in December.

Business activity in the Irish services sector, which accounts for about 70 per cent of the economy, hit a six-month high in December as the threat of a no-deal Brexit receded and businesses “regained momentum”.

Activity in Germany’s services sector grew at the strongest pace in four months in December, bringing a strong end to an otherwise weak quarter for the euro zone’s largest economy.

IHS Markit’s final services index rose to 52.9 from 51.7 in November. The figure was much higher than the flash reading of 52 and far above the 50 mark that separates growth from contraction.

The dominant sector also recorded its first increase in new business since August, and business confidence climbed to the highest level since April.

France’s dominant services sector enjoyed a pick-up in growth in December, as the euro zone’s second-biggest economy grapples with a nationwide strike and slower growth in other areas.

IHS Markit said its purchasing managers index for the services sector rose to 52.4 in December from 52.2 in November, unchanged from a preliminary reading.

However, IHS Markit’s overall composite PMI index, which includes the services and manufacturing sectors, slipped to 52.0 from 52.1 in November, reflecting slower manufacturing growth.

Italy’s services sector grew for a seventh month running in December, with new business continuing to pick up, contrasting sharply with a long-running contraction in manufacturing.

The IHS Markit Business Activity Index for services rose to 51.1 from 50.4 in November, just above the 51 consensus forecast of nine analysts polled by Reuters. The sub-index for new business in the services sector rose to 51.6 from 50.8.

China’s services sector expanded at a slower pace in December following a strong rebound in the previous month, with business confidence falling to the second lowest on record despite a pick-up in new orders.

The more downbeat reading suggests services companies remain cautious about the outlook for China’s economy despite a flurry of stimulus measures, signs of improvement in the manufacturing sector and a long-awaited US-China trade deal. The services sector accounts for more than half of the economy. – Agencies

1 How long can Government afford to keep State pension age at 66?
2 Declan Ganley denies Donald Trump trying to swing lucrative 5G contract for Rivada
3 Brexit: UK and EU agree to intensify talks in rush for deal
4 Deutsche Bank says Irish borrowers face long wait for lower rates
5 An Post letter business collapsing under Covid-19 - CWU
6 Marquees and fleets of delivery vans: how supermarkets are ready for Lockdown 2
7 Black Friday has become Black November for Irish retailers
8 Irish house prices could buck European trend and fall this year, says S&P
9 Fair deal? Family at odds with hospital and each other not so sure
10 Giving your child a mobile phone: The pros and the cons
Real news has value SUBSCRIBE