Sainsbury’s offers to sell stores to get merger deal through 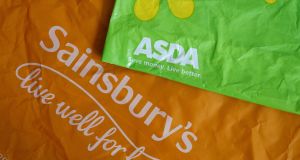 Sainsbury’s offered to sell between 125 and 150 stores to a rival as it seeks to overcome a UK regulator’s hostility to its purchase of Walmart’s Asda.

The supermarket chains made the proposal in their formal response to the Competition and Markets Authority, which last month stunned the grocers by all but blocking the £7.3 billion (€8.5 billion) deal. The regulator said its initial view was that even with substantial store divestitures, the combination would likely bring higher prices and worse choice for shoppers.

The CMA’s demands appear “to have been designed to be impossible to implement. As such it is prohibition in all but name,” the supermarket chains said in a response document to the regulator.

The antitrust regulator should use a higher threshold of consumer harm in its analysis, the supermarkets said, a calculation that would drastically cut the potential areas of concern from 629 local areas to 182. The offer comes on top of a pledge detailed by Sainsbury’s last week to reduce prices by more than $1 billion over the next three years.

The stores should be sold to a single rival or new entrant, Sainsbury’s said. The grocers have already received expressions of interest from potential buyers, according to the document. – Bloomberg