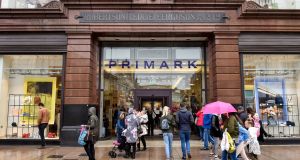 Penneys owner Associated British Foods on Tuesday reported a 1 per cent fall in first-half profit, with a resilient performance at its Primark fashion business offset by a previously flagged dip in the performance of its sugar business.

In January, AB Foods had warned that revenue and profit from sugar would fall more than previously forecast in 2017-2018 because of lower prices across the European Union.

For the six months to March 3rd, the group, which also owns major grocery, ingredients and agriculture businesses, made adjusted operating profit of £648 million (€751 million). That compares with company guidance of a “flat” outcome and £652 million made in the first half of its 2016-2017 year.

On a constant-currency basis sales and profit growth was achieved in all of the divisions, other than sugar, where the reduction was as expected.

However, overall like-for-like sales at Primark fell 1.5 per cent in the half-year despite a rise in same store sales in the UK, as the impact was felt more acutely elsewhere in Europe, in particular northern Europe.

The group maintained its full-year outlook, forecasting “progress” in both adjusted operating profit and adjusted earnings per share.

It forecast a second-half acceleration in profit growth at Primark, due to margin improvement, and continued profit growth from the other non-sugar businesses.

“These should more than offset the decline in profit at AB Sugar in the balance of the year,” said chairman Michael McLintock.

Shares in the group, down 23 per cent over the last six months, closed on Monday at 2,583 pence, valuing the business at £20.3 billion.

The group is majority-owned by the family of chief executive George Weston. – Reuters