SuperValu products to go on sale in Bahrain in €5m deal 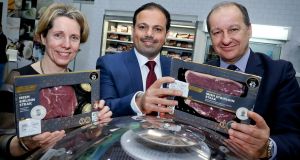 The deal with Alosra, the grocery retail subsidiary of the Bahrain-listed BMMI, will see Musgrave supply a selection of products from its SuperValu and Musgrave own-brand ranges as well as a number of Irish brands.

This isn’t the first deal of its kind for Musgrave which, in 2016, agreed a partnership with Alibaba to use its e-commerce platform to sell SuperValu products directly to Chinese consumers.

Musgrave’s announcement was made at Bord Bia’s Marketplace International conference at the RDS in Dublin. Bord Bia’s chief executive, Tara McCarthy, also flagged the growing international demand for Irish food and drink, noting this latest deal will “provide a number of Irish suppliers with access to the growing Middle Eastern grocery retail market”.

Founded in 1876, Musgrave directly employs more than 6,400 people and has retail sales worth €3.7 billion. In addition to SuperValu and Centra, Musgrave operates the Daybreak and Marketplace brands in Ireland and has two Spanish brands, Dialprix and Dialsur.

In 2016, the latest year for which accounts are available, Musgrave plc recorded a pretax profit of €88.5 million, however, €15.5 million of that was attributable to an exceptional non-cash pension gain.

The majority of its sales were made in the Republic, followed by the UK and Spain. Staff numbers at the company fell in the period by 767 following the sale of its UK Budgens and Londis businesses in 2015 to Booker.