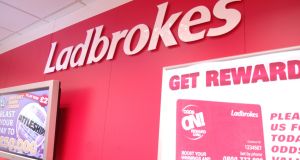 Ladbrokes’ owner GVC shed nearly a fifth of its value on London’s stock exchange after its two top executives sold about £20 million worth of their shares in the UK gambling group.

Kenny Alexander, chief executive of GVC, sold £13.7 million worth of his holdings in the online gambling operator, while Lee Feldman, its chairman, sold £6 million.

The directors’ sell-off prompted speculation that the pair were looking to move on from the company but a spokesperson for GVC said that the sale was done to “satisfy an institutional buyer”.

“Investors are clearly spooked by this,” said Russ Mould, investment director at AJ Bell. “The two directors have pledged not to sell any more while they ‘continue’ at GVC. Investors may have read that statement as implying the pair aren’t going to be around that long.”

GVC’s shares were recently down about 15 per cent in midday trading on Friday in London.

The directors’ sales follow GVC’s announcement this week of a third consecutive full-year loss for 2018. The FTSE 250 company, who bought high street bookmakers Ladbrokes Coral last year for £4 billion, on Tuesday reported a pre-tax loss of £18.9 million, in part due to one-off costs relating to writedowns in the value of Ladbrokes’ high street shops and back taxes incurred in Greece.

The company spokesman pointed out that Mr Alexander’s holding in the company as a percentage of his salary - even after the sale - was still eight times more than the average for industry chief executives.

Mr Alexander sought to reassure investors about his and Mr Feldman’s position, saying in a statement: “We have both held large personal shareholdings in GVC for a long time and continue to do so. Both of us remain fully committed to GVC and, whilst I continue to have the support of our shareholders, I’m here for the long term and at the very least I have a current plan that will take three plus years to accomplish.”

Shares in fellow betting companies Paddy Power Betfair and William Hill sank more than 3 per cent before clawing back some of their decline amid speculation that there would be an announcement of further industry regulation in the UK treasury’s spring statement next week.

In the UK’s most recent budget statement in October, the chancellor announced a cut to the maximum stake permitted on fixed-odd betting terminals - casino-game style slot machines that have been dubbed the “crack-cocaine” of gambling. Since then the UK Gambling Commission has announced more consultations into online gambling and the use of credit cards to bet. – Copyright The Financial Times Limited 2019