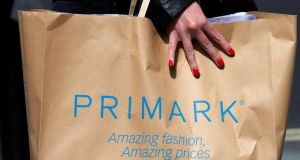 Primark denied the reorganisation had anything to do with Brexit. Photograph: Suzanne Plunkett/Reuters

Penneys owner Primark has announced plans to move 220 UK-based roles to its Irish headquarters in Dublin.

The company said the changes were part of an ongoing review of operations to improve efficiencies and support growth. However, it has denied a report that staff were given an ultimatum to move to Dublin or face redundancy.

“All of our people who are in any affected roles will have the opportunity to work in Dublin,” it said.

“We recognise that being based in Dublin may not be an option for everybody and if an alternative position cannot be found, then redundancy will be our last resort,” the company said.

Primark, which has 37 stores in the Republic, also denied the reorganisation had anything to do with Brexit.

“This decision is solely for the purposes of driving operational efficiency and is completely unrelated to any other external factors,” it said.

Last month, the retailer’s owner AB Foods rebuked the British government for contemplating leaving the European Union without a deal, suggesting the uncertainty was impacting its operations.

Primark confirmed the proposed changes would affect staff across its buying, merchandising, design, quality and sourcing operations at its Reading office in the UK. There were 220 people based in Reading who would be offered roles in Dublin, it said.

“From September 2019, we will be amalgamating all our buying, merchandising, design, quality and sourcing operations to be based at our headquarters in Dublin,” he said.

“This change will ensure our business strategy and our expansion into new international markets is fully supported,” he said. The group’s Reading office will remain open, with about 270 staff not subject to the move to Ireland, the company said.

Primark people and culture director Lorraine Culligan said: “It is important that the scale of our business and the needs of our customers are reflected in our internal structures as Primark continues to grow.”

“All of our people who are in any affected roles will have the opportunity to work in Dublin,” she said.

Ms Culligan said Primark’s office in Reading would continue to play a vital role in the business.

AB Foods, which owns the Primark label and food brands such as Ovaltine, Ryvita, Twinings and Jordans said last month the uncertainty over Brexit was impacting the group’s current operations, noting it had packaged grocery products exports in transit on the sea.

“We don’t know now whether they will be considered to be an import from the EU or from a country that they haven’t got a trading relationship with,” finance director John Bason said.