LK Bennett lines up administrators as it struggles to find backer

Retailer operates within Brown Thomas and Arnotts in Dublin 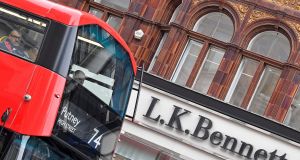 LK Bennett has suffered woes similar to those felt by many UK bricks-and-mortar retailers in recent months. Photograph: Reuters

LK Bennett is preparing to appoint administrators after its owner struggled to find a new financial backer for the loss-making fashion chain, potentially putting jobs at risk in both the UK and the Republic.

Famous for its signature kitten heels, which start at £175 (€203) per pair, the company was founded by the entrepreneur Linda Bennett in 1990. Ms Bennett regained full control of the business last year from private equity investors but it was reported last month that she had drafted in advisers to look at restructuring options, which included a potential sale.

The company, which has a presence in 53 markets, has filed notice of intention to appoint an administrator.

The court document provides management with several days breathing space as it prevents creditors from calling in their debts. The retailer, has 41 outlets in the UK, including two in the North, and five in the Republic, including concessions. It operates within the Brown Thomas store on Grafton Street in Dublin, as well as within Arnotts.

EY, the advisory firm, will oversee the insolvency if no new investment can be found in the coming days, according to Sky News, which first reported the story. EY declined to comment.

LK Bennett, a brand favoured by Kate Middleton, has always described itself as bringing “a bit of Bond Street luxury to the high street” but has not been immune to tough high street trading.

If the retailer were to fall into administration it would be a dramatic reversal in fortunes for LK Bennett. Ms Bennett sold a controlling stake in her business in 2008 to Phoenix Equity Partners in a deal said to have valued the company at £100 million. After struggling for several years Ms Bennett bought out Phoenix last year. However, the most recent accounts filed at Companies House show the business made an operating loss of £5.9 million in the year to 29 July 2017. At a pre-tax level, losses ballooned to £48.3 million for the same period because of a corporate restructuring that involved writing off amounts owed by former group companies. – Guardian service