‘I plan to stay with the business but . . . no one goes on forever,’ says chief executive 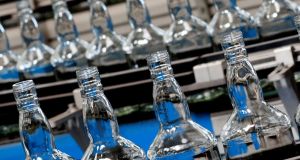 New York-listed Ardagh reported on Thursday that it generated revenue of $2.26 billion in the second quarter.

Dublin-born financier Paul Coulson has hired former KPMG Ireland head Shaun Murphy as chief operating officer of his Ardagh Group, lining up a potential successor to the billionaire at the helm of the $12.3 billion (€11.1 billion) glass bottle and metal cans group.

Mr Coulson (67) told analysts on a call on Thursday, after Ardagh reported quarterly results, that the appointment of Mr Murphy (52), who recently completed a six-year term as managing partner at KPMG Ireland, was “part of long-term succession planning”.

“I plan to stay with the business but, you know, like everyone, no one goes on forever,” said Mr Coulson, who remains group chairman and chief executive and whose indirect 33 per cent equity holding in Ardagh is currently worth $1.4 billion. “Succession planning is important.”

Earlier this month Ardagh announced it was merging its food and speciality cans unit with Exal, a business owned by the Ontario Teachers’ Pension Plan Board that makes similar products and has clients including Kraft, Mondalex and AB Inbev.

Ardagh will retain a 43 per cent stake in the joint venture, called Trivium, and use a $2.5 billion cash payment it is receiving for the assets it is putting into the partnership to reduce its overall debt.

Mr Coulson told analysts on Thursday’s call that Ardagh had received a number of takeover approaches for the food cans division over the past year, but wanted to continue to have a stake in the business.

“Far from exiting, we see this as a vehicle that will grow significant value for us over the coming years,” he said.

Ardagh will continue to have a wholly owned beverage cans business that it acquired three years ago.

Ardagh traces its roots back to the 1932 formation of the Irish Glass Bottle Company in Dublin and has been transformed since Mr Coulson bought an initial stake in 1998 and became its chairman. Ardagh has spent about €7.5 billion on a series of acquisitions since then. It switched from reporting figures in euro to dollars early last year.

The group reiterated its full-year forecast that earnings before interest, tax, depreciation and amortisation (ebitda) will amount to at least $1.5 billion, before the impact of the food and speciality cans deal. Last year’s ebitda amounted to $1.48 billion.

1 Comcast acquires Irish cloud-based telco Blueface
2 Ryanair to pay portion of Peter Bellew’s legal costs, court rules
3 Firm sues Trinity College over contract for managing visitors
4 High costs and low returns will fuel nursing home shortage - CBRE
5 Pilita Clark: When a rude boss keeps you waiting, why not walk out?
6 Money matters: ‘My father embarrassed us with his haggling’
7 US threatens retaliation against EU over proposed carbon tax
8 Are there annual limits on inheritances or gifts to a child?
9 Irish-founded ‘kid tech’ company SuperAwesome gets Microsoft backing
10 Restaurants put VAT cuts at the top of their pre-election menu
Real news has value SUBSCRIBE