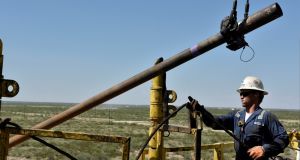 A drilling crew member raises a drill pipe on to the drilling rig floor on an oil rig in the Permian Basin near Wink, in Texas. Photograph: Nick Oxford/Reuters

Oilfield service companies have been relying more on demand from international markets, which has recovered after a prolonged slump in oil prices, especially at a time when US oil and gas producers cut spending to reward investors with share buybacks and dividends.

Demand for services like drilling and pumping has also been hit by weak oil prices late last year and pipeline constraints in the Permian Basin, the biggest shale play in the United States and home to a majority of the oil rigs.

Rival Schlumberger on Friday posted a higher-than-expected second-quarter revenue and an increase in profit on demand from markets outside North America.

Halliburton’s revenue from international markets jumped more than 12 per cent to $2.60 billion, while revenue from North America fell 13.2 per cen t to $3.33 billion.

Net profit fell to $75 million, or nine US cents per share, in the quarter to June 30th, from $511 million a year earlier. – Reuters

1 Volvo warns of scaled back car line-up if UK splits from EU rules
2 US threatens retaliation against EU over proposed carbon tax
3 NI house builder apologises to Harry and Meghan over adverts
4 Little strategic thinking in election manifestos of Fine Gael and Fianna Fáil
5 CPL founders Anne Heraty and Paul Carroll in line for €1m dividend payout
6 Are there annual limits on inheritances or gifts to a child?
7 Opioid executive admits to ‘no morals’ ahead of prison term
8 Farmer seeks to challenge €3.6bn Intel plan in High Court
9 South Dublin Credit Union members urged to borrow more to ensure survival
10 Who are Ireland’s 17 billionaires?
Real news has value SUBSCRIBE